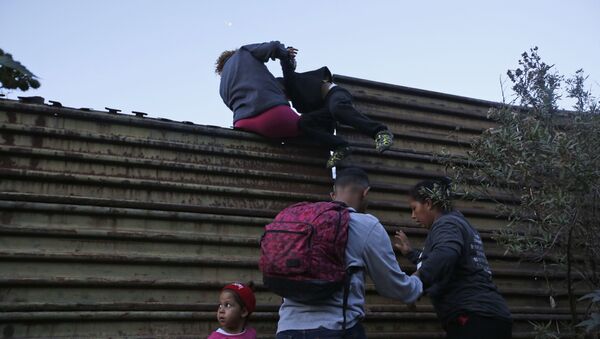 © AP Photo / Moises Castillo
Subscribe
WASHINGTON (Sputnik) - The border wall President Donald Trump shut the US federal government down over is not part of any coordinated strategy to limit undocumented migration but is a potent emotional symbol for his political base, analysts told Sputnik.

The US federal government has been shut down for eleven days because Democrats have refused Trump’s demand to include $5.6 billion in funding in next year’s budget to build a wall on the southern border.

On Wednesday, talks between Trump and Democratic lawmakers at the White House collapsed on the eve of the new US Congress convening. After the meeting, House Democrats vowed to submit legislation on Thursday that includes only $1.3 billion in border security funding, far short of Trump’s target.

Currently there is nearly 600 miles worth of barrier, primarily consisting of 16-foot high fencing, along the 1,900-mile US-Mexico border. Trump wants to erect steel and/or concrete walls over 30 feet tall on more than 200 miles of the border that would include new and replacement barriers.

"The problem is that this wall is not and never was part of a well thought organic border security plan aimed at preventing or at least containing illegal immigration," Global Policy Institute President Professor Paolo von Schirach said on Wednesday. "For Trump and his core supporters, the Mexico border wall was and is a symbol of America First in action."

'Artistically Designed Steel Slats': Trump Says Border Wall Will Be 'Beautiful'
Building the wall on a border symbolizes "getting tough" in a hostile world by protecting US core interests, he added.

Parts of a wall or physical barrier at the US land border with Mexico have already been built under other presidents, Schirach recalled.

"Trump is the first US leader who made the wall into a core issue, a symbol of his agenda," he said.

The Democrats who now control the House of Representatives, the lower chamber of Congress that controls funding also see the wall as a symbolic issue to be opposed at all costs, Schirach observed.

"Given the hyper partisan climate in Washington, it is no surprise that the Democrats look at the same wall ‘project’ not as a policy issue to be discussed with the goal of reaching some compromise on an issue," Schirach said.

"If Trump wants the wall, then it seems to be the duty of all good Democrats to oppose it," he said.

"Now it is basically all about brinkmanship. Who will blink first? Based on his own calculations, Trump decided that it is politically alright for him to cause a major national disruption. We are talking about posturing, rallying the base — on both sides," he said.

US border security and the fashioning of a comprehensive immigration policy were serious and important matters, Schirach advised.

"A totally divided US leadership cannot even begin to have a constructive debate on realistic, workable policy options," Schirach warned.

Trump on Wednesday, despite talks collapsing, said in a twitter post that he was till ready and willing to reach a funding agreement with the Democrats and urged both parties to work together.

Former Brown University Assistant Economics Professor Barry Friedman told Sputnik he held out hope that Trump and the new Democratic majority in the House could still find room to maneuver, bargain and compromise over the wall and government funding and end the ongoing shutdown.

"The Congress can agree on policies that reduce illegal immigration, and more tightly screen refugees and impose limits on legal immigration — Mr. Trump could call this a victory of bargaining where the threat of the Wall is just an expensive bargaining chip that may not be needed," he said.

A compromised agreement on limiting illegal immigration could still be achieved with a combination of preventive and enforcement measures, Friedman suggested.

US Authorities Fire Tear Gas Against Migrants at Mexico Border - Reports
"The preventive [aspects] will have to involve detention centers for people awaiting deportation. To enforce the compromise, there has to be substantial policing of people who overstay travel and work visas, who come across the border illegally," he said.

Such detainees should lose their place in line to be heard for asylum and be deported to wait a turn, Friedman advised.

"On the subject of the Wall, what data shows how many illegal immigrants are stopped this way?" he asked.

Also, building the border wall "does not deal explicitly with policing and with reducing the number of refugee hearings and visa abuses and the total level of immigration," Friedman pointed out.

Trump was acting as if unilateral action by a president can simply overcome existing US immigration laws, Friedman observed.

Migrant Caravan Provides Trump Ammunition For Building Border Wall
On the other side of the US political divide, Trump’s "opponents suck out the oxygen by also flooding the zone with congressional powers of investigation, especially now that lying to Congress has been successfully prosecuted," he noted.

However, if the Congress failed to produce specific marketable new ideas on immigration, they would share the public disgust over the gridlock in the budget, Friedman warned.

000000
Popular comments
A wall worked for the communists in East Berlin. It's working for the Israelis in dealing with terrorists in the Middle East. It does ok in keeping North and South Korea separate. I think it'll work on the U.S. southern border. Sputnik, it doesn't seem that your "analysts" know much in the way of history or current world events. I think you guys are slipping on whose opinions you publish.