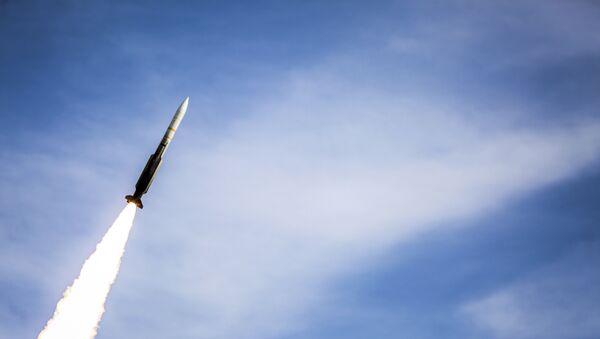 © AP Photo / Iranian Army
Subscribe
In late December, the Islamic Revolutionary Guard Corps said that any efforts by foreign countries to stop the country from testing missiles would be futile.

Iran will face economic and diplomatic consequences if it goes ahead with plans to launch three space vehicles in the coming months, US Secretary of State Mike Pompeo warned in a statement on Thursday.

"The United States will not stand by and watch the Iranian regime's destructive policies place international stability and security at risk," Pompeo said. "We advise the regime to reconsider these provocative launches and cease all activities related to ballistic missiles in order to avoid deeper economic and diplomatic isolation."

Iran to Equip Its Speed Boats With Missiles and Stealth Technology - Report
Pompeo noted that Iran has publicly announced plans to soon fire off three Space Launch Vehicles, or rockets that are used to carry payloads. He added that such launches incorporate the same technology to that used in ballistic missiles.

The top US diplomat also said the launches would signal Iran's ongoing "defiance" of United Nations Security Council Resolution 2231, which endorsed the international nuclear agreement and called upon the Islamic Republic to refrain from any activity related to ballistic missiles capable of delivering nuclear weapons.

Pompeo noted that France, Germany, the United Kingdom and other countries around the world have expressed "deep concern" over the tests that Iran has conducted since Resolution 2231 was adopted in July 2015.

He also cautioned that the test launches have a "destabilizing effect" on the Middle East and beyond.

Iran May Use Iraq as Attack 'Platform' - Israel's Military Intel Chief
In addition, Pompeo accused Iran, which he called the "world's foremost state sponsor of terror," of sharing missiles and missile technology with its "proxies" in the Middle East, in further violation of Resolution 2231.

Unanimously adopted on July 20, 2015, Resolution 2231 formally endorsed the international nuclear deal, formally called the Joint Comprehensive Plan of Action (JCPOA). The resolution laid out a plan for removing UN sanctions on Iran in exchange for strict monitoring of its nuclear program, which the country insists is peaceful.

The United States withdrew from the JCPOA in May 2018, and Tehran has since then accused Washington of violating Resolution 2231. Iran has also denied that its missile program violates the resolution.

000000
Popular comments
Lmao. From Canada. Go suck it amerika. You have no right to dictate to a sovereign nation what it can or can not do. If anyone shouldn’t have nukes it is you. Your the only nation to have ever vaporized a 250,000 people by dropping two bombs. You are a disgusting nation and have never been the leader. You’ve been a user and abuser.
A-mind-not-wasted
3 January 2019, 16:58 GMT3
000000
Wait a minute the US is the one that dropped out of INF and sanctions Iran for something they didn't have any control of and now the US demands the stop testing missiles. The US lost its say in the any matters of Iran when they dropped out of INF, so mid your own business US.
Shadowlady8
3 January 2019, 17:32 GMT2
000000
Newsfeed
0
New firstOld first
loader
LIVE
Заголовок открываемого материала
Access to the chat has been blocked for violating the rules . You will be able to participate again through:∞. If you do not agree with the blocking, please use the feedback form
The discussion is closed. You can participate in the discussion within 24 hours after the publication of the article.
To participate in the discussion
log in or register
loader
Chats
Заголовок открываемого материала
Worldwide
InternationalEnglishEnglishMundoEspañolSpanish
Europe
DeutschlandDeutschGermanFranceFrançaisFrenchΕλλάδαΕλληνικάGreekItaliaItalianoItalianČeská republikaČeštinaCzechPolskaPolskiPolishСрбиjаСрпскиSerbianLatvijaLatviešuLatvianLietuvaLietuviųLithuanianMoldovaMoldoveneascăMoldavianБеларусьБеларускiBelarusian
Transcaucasia
ԱրմենիաՀայերենArmenianАҧсныАҧсышәалаAbkhazХуссар ИрыстонИронауОssetianსაქართველოქართულიGeorgianAzərbaycanАzərbaycancaAzerbaijani
Middle East
Sputnik عربيArabicArabicTürkiyeTürkçeTurkishSputnik ایرانPersianPersianSputnik افغانستانDariDari
Central Asia
ҚазақстанҚазақ тіліKazakhКыргызстанКыргызчаKyrgyzOʻzbekistonЎзбекчаUzbekТоҷикистонТоҷикӣTajik
East & Southeast Asia
Việt NamTiếng ViệtVietnamese日本日本語Japanese俄罗斯卫星通讯社中文（简体）Chinese (simplified)俄罗斯卫星通讯社中文（繁体）Chinese (traditional)
South America
BrasilPortuguêsPortuguese
NewsfeedBreaking
20:26 GMTFrench President Macron's Health Pass QR-Code Leaked to Internet - Reports
19:37 GMTThe US Space Force’s Oldest Adversary, Social Media, Roasts Their New Uniforms
19:25 GMTTraffic on Motorway in German Bavaria Halted Due to Armed Hostage-Taking Situation - Reports
19:24 GMTJoe Biden, DHS Chief Upset by 'Horrible' Videos of Border Patrol Dealing With Haitian Migrants
19:24 GMTBiden Believes Footage From US-Mexico Border ‘Horrific’ and Supports Probe
19:15 GMTSoldiers Killed in Galwan Valley Clash With India Now Part of Patriotism Lessons for Kids in China
19:14 GMT‘An Unpredictable Ally’: Does the AUKUS Pact Undermine the Quad's Significance?
19:11 GMTSearch for Fiancé of Gabby Petito, Brian Laundrie, Resumes in Florida Wilderness
18:54 GMTFrench Defenсe Minister Says US Instigating Confrontation With China
18:48 GMTNew ‘Storytelling’ in Skripal, Litvinenko Cases Meant to 'Sabotage' Effort to End Russia-UK Cold War
18:40 GMTTexas Governor Says Biden Has Not Granted Federal Emergency Declaration Over Border Crisis
18:39 GMTWoman Claims US Billionaire Leon Black Raped Her in Jeffrey Epstein’s Townhouse, Media Says
18:29 GMTMigrants Escape After Overtaking Transport Bus
18:08 GMTVolcano Continues to Erupt on Spanish Island of La Palma
17:49 GMT'US Hegemonic System' Has 'Failed Miserably', Iran's Raisi Tells UN
17:24 GMTUSAF Reveals It Has Five New B-21 Strat Bombers in Production, Not Two as Originally Reported
17:07 GMTAncient Pyramid Made From Volcanic Ash Likely Built to 'Calm Earth’s Anger,' Media Says
17:00 GMTDozens Protest Outside UN Headquarters Against US Global Military Engagements
16:43 GMTUS House Democrats Introduce Legislation to Prevent Presidential Abuses
16:35 GMTPalestinians Ready to Renew Talks With Israel If They Show Readiness, Foreign Minister Says