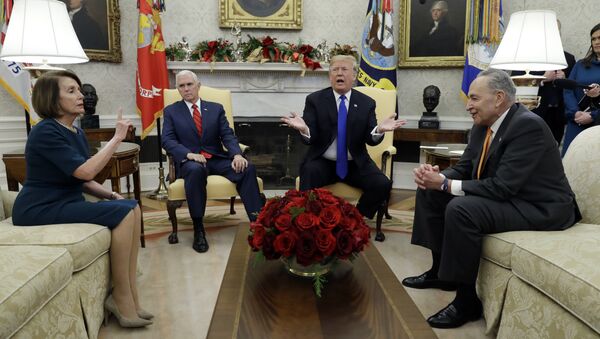 The confrontation between President Trump and Democratic Congressional leaders over $5.6 billion in border wall funding which sparked a partial government shutdown shows no signs of abating as the Dems prepare to take their oath of office and kick off a new session of the House of Representatives Thursday.

The partial shutdown, now on the verge of entering its third week, is likely to continue, as neither side has an incentive to take the steps necessary to end it, US pundits fear.

Commenting on the quagmire, CNN contributor Stephen Collinson pointed out that "right now, all the political forces that could bring the two sides together are flowing in opposite directions, as the political significance of the moment suddenly raises the stakes in their showdown over funding for Trump's border wall."

Human Faeces, Garbage Overwhelm US National Parks Amid Gov't Shutdown - Reports
The current, partial government shutdown, the third one to hit the US in 2018, began on December 22, affecting multiple departments including Homeland Security, Transportation, Justice, Commerce, State, Agriculture, Interior, the Treasury, and Housing and Urban Development, as well as numerous agencies such as the Environmental Protection Agency, the Food and Drug Administration and the Internal Revenue Service. A total of some 800,000 federal workers have been affected; some of them have been furloughed while others continue to work without pay.

On the eve of Thursday's opening of the Democratic-controlled House of Representatives for a new session, Trump and Democratic leaders walked away from a meeting with no indication that an agreement was in sight.

The president said he was "ready and willing to work with Democrats" on the issue, but only "to pass a bill that secures our borders, supports the agents and officers on the ground, and Keeps America Safe." Incoming House Democrats, meanwhile, said they would push their own legislation to reopen the federal government until February 8 while debate continued, saying the success of the bill would depend on support from the Republican-controlled Senate.

Most analysts don't believe the latter is likely, however, with Collinson pointing out that Senate Republicans have already "made clear they won't act on anything until a deal is reached that Trump will actually sign."

Dems Emerge From Trump Meeting Without Govt Funding Deal
On Wednesday, Republican Senate Majority Leader Mitch McConnell called the House Democrats' bill a "total nonstarter," and a "political sideshow," and said that Republicans would not vote on it.

As for presumptive Democratic House Speaker Nancy Pelosi, she has "zero desire to acquiesce to the President during her first hours with a gavel in hand," Collinson noted. Accordingly, "barring a miracle, the partial shutdown is not ending any time soon," he wrote.

Trump is facing his own pressures from everyone from conservative pundits to Congressional lawmakers, and is thus also "in no position to blink," the pundit noted. The president allegedly told Democratic Senate Minority Leader Chuck Schumer at a recent meeting that he would "look foolish" if he caved to the Democrats now, according to the New York Times.

In the meantime, Americans on social media have voiced growing frustration with the shutdown and the impact it has had on public services, dividing along partisan lines to blame either Trump or the Democrats and pointing out the disproportionate impact the debacle has had on the poor.

It's day 12 of the government shutdown.

National parks continue to be impacted by overflowing garbage, human waste and vandalism as the parks remain understaffed and open to visitors. pic.twitter.com/cVhcqIHB7W

BECAUSE OF THE GOVERNMENT SHUTDOWN THE NAVAJO NATION IS CUT OFFF FROM FOOD AND SUPPLIES- @POTUS https://t.co/08xRS1351q

The ongoing government shutdown could jeopardize funding for more than 751,000 Alabamians who depend on food stamps pic.twitter.com/Hijj8y6uwu

A government shutdown has *always* only meant a shutdown for the poor. The wealthy can pay the premium for services that are considered public goods. See: Malibu during forest fires.

This is an argument to bring more things into the umbrella definition of "public good"! https://t.co/GNJPO25WeR