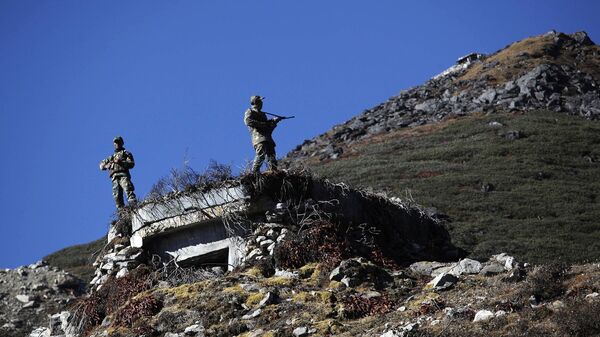 An act granting special powers to the military has been in force for the last three decades in India’s northeastern state of Arunachal Pradesh due to the presence insurgent groups in the area, including those belonging to Naga tribes who are looking to breakaway from the country.

India's northeastern state of Arunachal Pradesh has become a hotbed for tension between civilians and military forces deployed in the area for counter-insurgency operations. The strained relations entered the limelight after around 35,000 people in the Longding district made a solemn appeal to the Indian Army to not convert their homeland into a battlefield by committing atrocities.

Speaking to Sputnik, members of the Wancho tribe that inhabit most of Longding explained why they are protesting the presence of armed forces in civilian areas.

"The Wancho people are caught between the devil and the deep blue sea. If we inform the Indian Army of the presence of militants, the Naga militants will kill us. If we do not pass on such information, then our own Indian Army will torture us day in day out," Tahjam Wangsu, vice president of the Wangcho Student's Union, said.

Fearing Prosecution for Fake Encounters, Indian Army Moves to Court for Relief
Tahjam Wangsu is one of the several people who attended a recent village-level security meet at the Indian Army camp in the Longding district. Longding is one of the three districts of Arunachal Pradesh, which has long been designated a "disturbed area" by the Indian government. Besides Longding, Tirap and Changlang are currently governed by the controversial Armed Forces Special Powers Act (AFSPA), which empowers the army and central paramilitary forces to kill anyone acting in contravention of the law.

Moreover, the act grants government forces the power to arrest and search any premises without a warrant.

The Wancho tribe is culturally related to the Naga tribe, therefore, Naga militants often seek refuge in the homes of Wanchos who say they have very little choice.

"I am not saying that militants of NSCN (IM) are not taking shelter in the areas but what can the villagers do in front of gun-toting militants? They (militants) come to us and force us to provide them with meal and shelter. We had even asked the army to deploy personnel for our security but they did not. They (army) are only concerned about their lives and not of the villagers," Tahjam Wangsu added

On the other hand, the Indian Army claims that the safety of the civilians has always been their first priority.

"It is a fact that most of the time we do not retaliate against militants to avoid undue casualties. But we cannot tolerate if the people take undue advantage," Commanding Officer of Indian Army's 19 Sikh Regiment M Karmaker said during one of the village-level security meetings.

India Partially Abolishes Armed Forces Special Powers Act
Villagers refute this claim, insisting the army has been spreading fear among locals while they have failed to make progress in containing the insurgents.

"Sometimes, we cannot believe that we are living in a democratic country. A few days ago, without any intimation, soldiers started indiscriminate firing in the night in my village. When asked, they said they had spotted militants. However, in the last many years, they eliminated only one militant. This has been their achievement," Tahjam Wangsu claimed.

Refuting the claims, Lt Col BL Gulzar of the Indian Army's 19 Sikh Regiment said during the village meeting that the firing was carried out after the villagers shared information about the presence of militants in their area.

However, locals allege that the army regularly commits atrocities against the locals by conducting unwarranted raids and interrogations that seldom bear fruit.

READ MORE: Indians in Border Areas Will No Longer Have to Listen to Chinese Broadcast

"The army alleged that one of the shopkeepers in our area had been supplying arms to the Naga militants. He was administered electric shock from which he has still not fully recovered. However, nothing was found in the probe," Langhphu, another shopkeeper, expressed anguish while speaking to Sputnik.

Historic Win for Indian PM: Naga Insurgents Set to Sign Peace Accord Soon
The government of India, on its part, maintains that the raids and searches are being conducted as per the law and that there is no immediate proposal under consideration for discontinuation of the AFSPA in the state of Arunachal Pradesh.

"The search operation was conducted in accordance with the laid down procedures, causing no undue harassment of the locals. After the search operation, a ‘no objection certificate' was obtained from the village elders. Based on certain allegations regarding misbehaviour and harassment, the incident was inquired into and the villagers have confirmed that there are no complaints against the Army," Minister of State for Defence Subhash Bhamre  said on December 12 in parliament.

Nevertheless, the people of Wancho have argued that it would be better for society and the country as a whole to do away with such laws that give undue powers to the army.