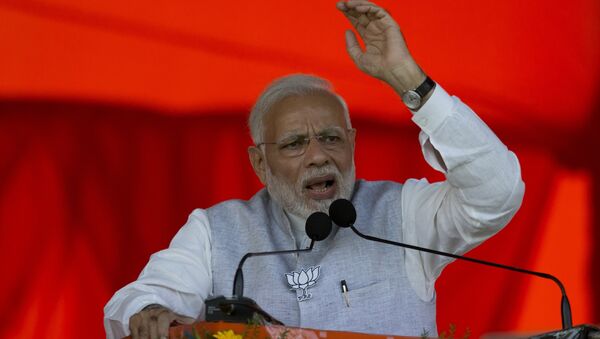 A number of mob lynchings, launched under one pretext or another, have weighed on India's national conscience for some time now and prompted criticism from human rights organisations. News of the murders has spread beyond India's borders and been met with widespread condemnation.

New Delhi (Sputnik) — Indian Prime Minister Narendra Modi has said that mob lynchings are invariably reprehensible, but stressed in an exclusive interview to the news agency ANI that his Government found them "absolutely condemnable" when perpetrated in the name of protecting cattle. "Incidents of such a nature do not reflect well on a civilised society," he added.

India Mulls Specific Laws to Deal With Mob Lynching
In an effort to show a bi-partisan face, the Prime Minister said that there was no point in debating whether such lynchings had happened during any particular government, as he considers each and every one of the incidents reprehensible.

"Did mob lynching start after 2014? This is a result of ills within society. For improving this situation, we should all work collectively," Prime Minister Narendra Modi said.

"We must unite to condemn lynchings and refrain from politicising them," he added.

The prime minister emphatically emphasised that his government believes in ‘Sabka Saath, Sabka Vikas', which translates as ‘Collective Cooperation towards Collective Development'. Elaborating further, he held that his government's achievement of providing electricity to the 18,000 remaining non-electrified villages in the country did not discriminate between the religions of the beneficiaries, just like the Ujjawala scheme for providing subsidised LPG connections to poor and marginalised members of society.

The Prime Minister took a snide take on political violence in two states, namely Kerala and West Bengal, in which some people from his party (the Bharatiya Janata Party or BJP) were killed. He noted that the point wasn't "whether our workers were killed or not, but that political violence is not good for our democracy." "All political parties will have to think about it," he exhorted.

Speaking to the state governments, the prime minister appealed to those political parties that are in government, saying that they should train their cadres to behave in a democratic way.

The Prime Minister talked about how other countries view India's harmony amidst diversity.

"A Muslim scholar from the Middle East wrote about India's harmony despite diversity in faiths and culture, contrasting it with their region wherein people of the same faith attacked each other," he said. "Our country should take pride in this compliment. India should take pride that we have been living in harmony for ages," he added.