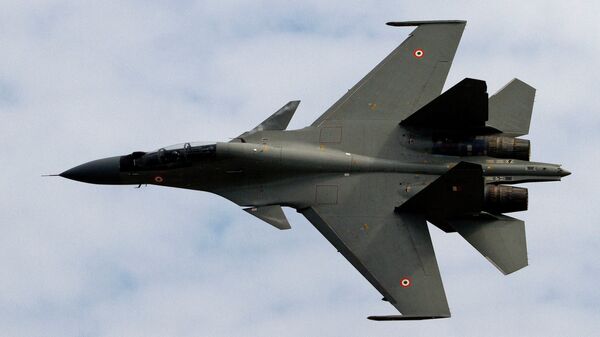 Disagreeing with the opposition's interpretation of an audit report that found that Su-30 fighter jets supplied to the Indian Air Force by the local firm HAL are costlier that those supplied by the Russian OEM, the India government has clarified that the version being locally manufactured have been modified for enhanced operational capability.

New Delhi (Sputnik) — India's defence ministry has listed several reasons for the higher costs of the Su-30 fighter jets supplied to the Indian Air Force (IAF) from the local production line, in comparison to those supplied directly by the original Russian manufacturer.

Subhash Bhamre, India's Minister of State for Defence, said on Wednesday that the foremost reason for the higher cost is that the specifications of the Russian SU-30 and indigenously manufactured SU-30MKI are not the same; hence, a one to one comparison of cost may not be appropriate.

Indian Air Force Gets First Locally Overhauled Su-30MKI
State-owned Hindustan Aeronautics Limited (HAL) is currently producing the Su-30MKI at a flyaway cost of around $62 million per aircraft, which is around $22 million higher than the Su-30 jet supplied by Russia.

"Additional modifications are incorporated in the indigenous Su-30MKI to enhance the operational capability and to suit Indian Air Force (IAF) requirements. Owing to the low volume of production of the Indian SU-30 MKI as compared to the —Russian SU-30, economies of scale come into play," Minister Subhash Bhamre argued while replying to a query raised by a fellow parliamentarian.

Bhamre added that being a Transfer of Technology (ToT) programme, the total cost also involves payment of license fee to the Russian side.

HAL imports raw materials and proprietary components from Russian firms and assembles them at its production facility in Nasik. HAL is presently assembling the last 23 Su-30MKI on order from the Ministry of Defence.

"Import of raw materials and proprietary components from Russia involves dependency on Russian Original Equipment Manufacturers (OEMs) for the offered kit costs, which are not proportionate with the kit contents," Bhamre added.

Indian HAL-Built Su-30MKI Crashes During Pre-Delivery Test Flight (VIDEO)
The twin-seater, twin-engine Su-30MKI, developed by Russian aircraft maker Sukhoi and license-built in India, constitutes the backbone of the IAF. While the first 50 Su-30 aircraft were built in Russia, over 200 fighter jets were assembled in India.

The Indian defence ministry has also argued that indigenous manufacturing will create advanced skill sets in the country, a step towards self-reliance.

"Indigenous manufacturing will result in a lower life cycle cost and reduced dependency on OEM on repair and maintenance and faster turn-around time and quick support to IAF bases," Minister Bhamre further added.

Last year, HAL had offered to produce 40 additional Su-30MKI for the IAF at much a much lower court, but India turned down the offer.

"Since the facilities are indigenously established, future production supplies are likely to be cheaper if a new order for bulk production is placed on HAL," Bhamre concluded.