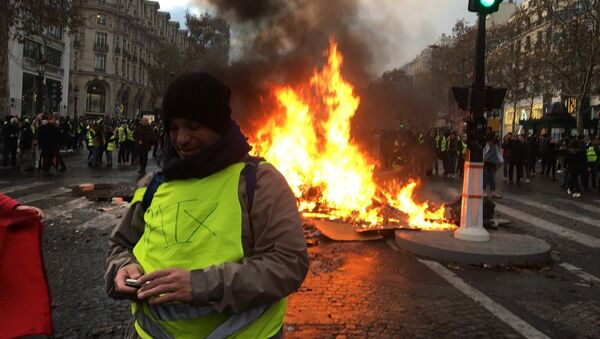 © Sputnik
Subscribe
Despite the French government scrapping its planned fuel tax hike, the policy which initially sparked the Yellow Vests protests, the movement has already turned into a broader campaign against Paris' policies and rising living costs.

Sahra Wagenknecht, founder of the Aufstehen (Get Up) group uniting Germany's left-wing movement, has warned that the organisation's members will take to the streets in 2019, in a move that she said was inspired by the Yellow Vests protests in France.

"We have big plans […] not least because we recognise when people go on to the streets to protest – especially those who have not had a political voice for many years who rediscover their voice by protesting – then political change can happen. This is what we're seeing in France right now," she told reporters in Berlin.

Touching upon the Yellow Vests movement in France, she claimed that it would be "completely wrong" to perceive it as something which only focuses on violence.

"Of course there are those ready for violence amongst the protesters, but the movement is much broader than that. I'm clear that we don't want any violence, but at the same time you have to recognise that it is a clear expression of pent-up anger. It doesn't just come out of nowhere," Wagenknecht pointed out.

According to her, increasing inequality in Germany and people's anger over the government’s failure to resolve the matter may prove to be a major motivating force which pushes ordinary Germans to finally take to the streets.

Singling out examples of "the French rising up against a fatal form of politics", she suggested that German people "will realise that they are far more able to put pressure on the government if they go out and protest."

Yellow Vests Are a Tsunami That No Power Can Prevent - Political Scientist
Her remarks came as French police dispersed earlier on Wednesday Yellow Vests protesters who were blocking an oil depot situated near the city of Rouen in the country's northwest. Riots broke out in Rouen on December 29, when some protesters set the entrance of the city's branch of the Bank of France on fire.

The wave of Yellow Vests protests in France — named after the reflective garment all French drivers are legally required to carry in their vehicles at all times — started in the country in mid-November.

While Paris abrogated its planned fuel tax hike, which is what initially sparked the protests, the "Yellow Vests" have evolved into a broader movement against government policies and rising living costs. The rallies have witnessed violent clashes between protesters and police.

000000
Popular comments
It is time to protest worldwide in 2019. Health insurance, taxes, all bills are so high that you do not even have money left to live. If the whole of Europe takes part, they must do something about it. The people are in the majority than the politicians, if we do not do something worldwide there is never anything. I am behind the French.