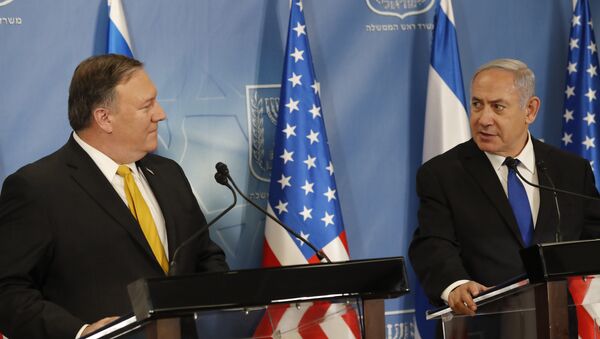 “Secretary of State Michael R. Pompeo met with Israeli Prime Minister Benjamin Netanyahu today in Brasilia, Brazil. They discussed the unacceptable threat that regional aggression and provocation by Iran and its agents poses to Israeli and regional security. The Secretary reiterated the United States’ commitment to Israel’s security and unconditional right to self-defense,” the statement read.

Netanyahu: Israel to Boost Ops Against Iran in Syria Amid US Pullout
The sides reaffirmed their commitment to strengthen bilateral cooperation as well as ties with Brazil, according to the statement.

Pompeo and Netanyahu met on the sidelines of the inauguration of Brazil’s President Jair Bolsonaro.

The United States quit the 2015 Joint Cooperative Plan of Action (JCPOA) nuclear deal with Iran last year and re-imposed two rounds of sanctions that earlier had been waived in return for Tehran scaling down its atomic energy program.

Netanyahu called the curbs on Iran's oil trade, shipping and banking as "the most severe sanctions imposed on Iran since the beginning of the effort to stop its aggression." The Israeli leader — fighting multiple corruption trails against him and his family at home — described US President Donald Trump’s decision to re-introduce sanctions as a "courageous, determined and important" move that, he said, would contribute to stability and security.

Iran Slams Trump's Visit to Iraq as Disrespect for Sovereignty - Reports
In December 2018, the US State Department noted that Washington fully supports Tel Aviv's right to protect itself from Iranian "adventurism" in the region that could threaten the existence of the self-described 'Jewish state.'

Iran, one of Syria's closest allies, has been supporting Damascus throughout the seven-year Syrian civil war. Although Israel has claimed officially that is has a neutral stance on the Syrian conflict, Tel Aviv has opposed an alleged Iranian military presence in Syria, fearing that Tehran could gain increased influence in the region.

Despite its claimed neutral stance, Tel Aviv has been conducting air raids in Syria that it claims are against the Lebanese paramilitary group Hezbollah.