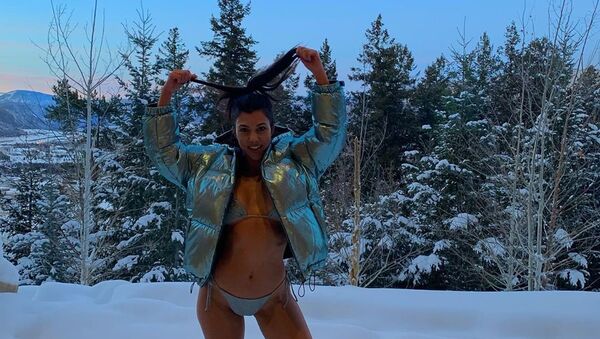 The photos were taken in Aspen, Colorado where the two celebrities went on vacation. Both pictures quickly attracted considerable attention on social media platform Instagram, accruing several million "likes" each.

Model and TV personality Kendall Jenner has once again managed to steal the spotlight on social media by braving the chilly weather to snap a racy photo of herself.

The photo, which Kendall posted on her official Instagram page on December 30, shows her standing in the snow wearing nothing but boots, a fur hat, a pair of sunglasses and a bikini.

"F*ck its cold," the celebrity remarked in the caption.

According to the NY Post’s Page Six, the photo op was done in Aspen, Colorado where the model went on vacation with her sister Kourtney Kardashian.

Shortly after, Kourtney decided to follow Kendall’s example, posting a similar photo of herself on social media.

However, the cold apparently was a bit too much for her, as she wore a blue puffer jacket on top as she posed for the picture.

Both photos quickly accrued several million "likes" each, with many people in the comments sections praising the models’ good looks.

Some, however, took a dim view of this stunt.

"You’re a mother/parent…. put some clothes on," livvviexo commented on Kourtney’s picture.

"And this is why their ratings keep falling…. #desperate," lightcasandra noted.