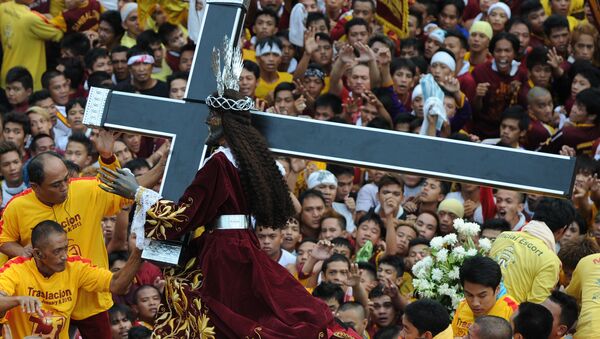 © AFP 2021 / TED ALJIBE
Subscribe
Radio Sputnik talked with Bernard Lecomte, a Vatican Specialist, French writer and a biographer of John Paul II and Mikhail Gorbachev, about the collapse of the USSR, peculiarities of Vatican diplomacy, Europe and liberalism.

How should the Pope's influence in the world be assessed? The Catholic Church should probably have the best-informed diplomats in the world because it has agents almost everywhere. Even if the Pope's words are not necessarily listened to, especially that of John Paul II with regard to the US intervention in Iraq in 2003, Catholicism has become increasingly influential in the Southern Hemisphere while it gradually abandons a western civilisation which has become dechristianized:

Roman Catholics Say Jesus' Cradle Was Shipped to Rome Away From Islamic Invaders
"The Vatican is, in fact, the most informed diplomacy in the world, having agents (almost) everywhere: bishops, religious fraternities, papal ambassadors. Despite the fact that the Pope's words are not always listened to (just as the views of John Paul II regarding the intervention in Iraq in 2003 were not listened to), they are becoming louder and louder in the Southern Hemisphere, and not in the West, which is departing from Christianity. (…) The Vatican has no oil deposits, no atomic bomb, no army (…). The Pope's only army are his words (…). According to Pope Francis, Europe has distanced itself from Christianity. 80% of Catholics live in the Southern Hemisphere. The Northern Hemisphere is history, culture, roots. But real Catholicism is no longer in France, in Spain or in England. It is in Brazil, Nigeria and in the Philippines".

Can you compare Pope John Paul II with Pope Francis? Do you consider them to have conservative or progressive ideas? During the past few weeks, the Marrakesh Pact (Pacte de Marrakech) has been vehemently debated. Why did Pope Francis advocate the signing of this UN treaty?

"Pope Francis follows the Commandments of Jesus Christ literally, as John Paul II might have done as well. (…) He refers to the Gospel [where it is said to welcome a foreigner who knocks at the door]. All the Popes say about the same thing. A Catholic must accept a foreigner. (…) To accept a foreigner, poor, in need of help, but without destabilising the European society. (…) As for conservatism, all Popes are conservatives. Pope Francis is an opponent of abortion, same-sex marriage".

At the beginning of the 21st century, what can be said today about Pope John Paul II and his principles in international relations? Did the inspiration of the Solidarity movement* (Polish: Solidarność), born on the other side of the Iron Curtain, contribute to the collapse of the USSR?

Illinois Finds Catholic Church Hid Abuse Accusations Against 500 More Priests
"John Paul II did not believe in the inevitability of communism, considering it to be a kind of "historical deviation". Therefore, he relied on Catholic communities, Poland, Slovaks, Slovenes, Lithuanians, partly Ukrainians, Hungarians, etc. And then gradually other communities: Protestants from East Germany, Estonia and Latvia, Orthodox from Romania, Bulgaria, and then all Christians from Eastern Europe realized that something was happening, that this person was speaking on their behalf, that he understood them".

READ MORE: Hands Off! Poland is Implementing a "Catholic Method of Taking Seminogram"

In 1989, after the fall of the Berlin Wall, diplomatic relations between the Kremlin and the Vatican which had been severed in 1917, were restored. Mikhail Gorbachev, who adhered to the same concept of united and independent Europe, came to the Vatican on an official visit:

"On 1 December 1989, that is three weeks after the fall of the Wall, when Mikhail Gorbachev visited John Paul II in the Vatican, they met for the first time — it was a historic visit […] They spoke mainly about Europe, about the "Common Home". Each of them had their own terminology. Gorbachev spoke of the "Common European Home", the Pope spoke of "Europe that breathes with both lungs": Western and Eastern. In fact, they talked about the same thing: about a united Europe with its own culture. (…) Both shared the fear that Europe would be influenced by the United States after the fall of the Wall".

The Pope, in addition to his duties as head of the state, also serves as the head of the Catholic Church, competing with the Russian and Greek Orthodox Churches. If, for political reasons, Catholics and Orthodox have been divided since 1054, the Second Vatican Council (1962), in which John Paul II actively participated, established a form of reconciliation, thus no longer considering their Slavic brothers as "schismatics":

"The sovereign pontiff dreamed of visiting Moscow but it was impossible. Gorbachev was ready to welcome him and even invited him. It was not the Soviet or Russian government that prevented this but the Moscow Patriarchate, the Russian Orthodox Church, who did not like John Paul II. He was for them if not an enemy then at least a rival".

*Polish: Solidarność, full name: Independent Self-governing Labour Union "Solidarity" was a broad anti-bureaucratic social movement, using the methods of civil resistance to advance the causes of workers' rights and social change, has been provided significant financial support by Pope John Paul II and the United States, estimated to be as much as 50 million US dollars.

000000
Popular comments
Vatican II was to the Catholic Church what Perestroika was to the USSR.