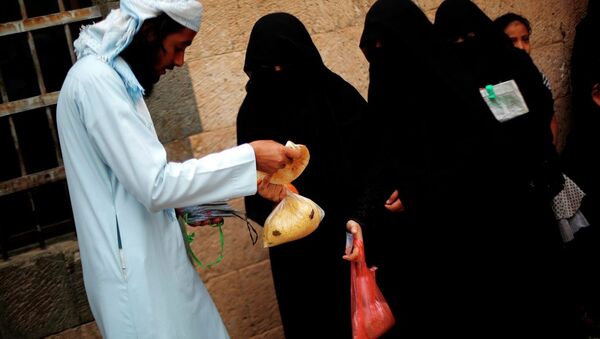 Major aid shipments of rice, grain and food baskets intended for needy populations in Taiz, Yemen, have been stolen by militants on both sides of the conflict in that country.

"The army that should protect the air is looting the aid," humanitarian official Nabil al-Hakimi told the Associated Press for a Monday report. Some 14 million Yemenis, or half of Yemen's population, live on the brink of starvation as a result of the chaos that's roiled the country since Saudi Arabia and a coalition of Arab states initiated a campaign against the Shiite Muslim Houthis in 2015 at the behest of Saudi Crown Prince Mohammed bin Salman.

International aid sent to Yemen has frequently failed to reach its intended recipients; instead, armed groups paid by Riyadh have pillaged the shipments, according to AP's review of public and confidential documents and interviews with dozens of humanitarian workers in the country.

To militants on the ground, international food aid has looked like dollar signs. Armed groups withhold food from civilian populations considered disloyal, siphon aid packages to feed themselves and sell the aid on the black market, the report says.

In Taiz, the third largest city in Yemen and under the control of Saudi-backed forces, much of the food is simply stolen and never accounted for. Approximately 5,000 sacks of rice destined for Taiz went missing in the first half of the year without a trace; 705 food baskets at a welfare warehouse were pilfered; 110 sacks of grain disappeared from humanitarian trucks prepared to deliver supplies to mountainous areas.

The problem is common among areas controlled by Saudi-aligned militants and Houthi forces alike, the report notes, adding that there are serious bureaucratic deficiencies with the United Nations' World Food Program, which has 5,000 food distribution sites within Yemen. The UN says it can only track where one in five deliveries go; the other 80 percent are untracked, according to the AP investigation.

The report estimates at least $4 billion worth of aid has been funneled into Yemen by Saudi Arabia, the United States, the United Nations and others, and there is actually enough food making its way into Yemen for the population to keep from starving. Due to the massive exploitation of these imports by parties within the country, though, approximately 10.8 million of
Yemen's 29 million inhabitants are still in a state of emergency when it comes to securing adequate nutrition to stay alive, a coalition of global relief groups said in an October report.

Speaking to AP about the lack of food in Yemen, Geert Cappelaere, Middle East director for the UN International Children's Emergency Fund, said, "This has nothing to do with nature. All of this is man-made. All of this has to do with poor political leadership which doesn't put the people's interest at the core of their actions."

"Since the Houthis came to power, looting has been [happening] on a large scale," former Houthi acting Education Minister Abdullah al-Hamidi, who later defected to the Saudi-led coalition, told AP. "This is why the poor get nothing. What really arrives to people is very little."