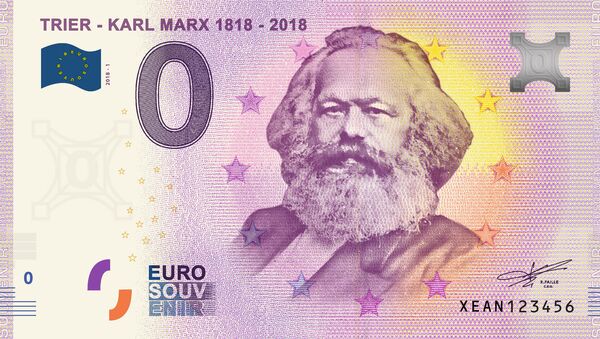 © Photo : Euro Banknote Memory
Subscribe
Sputnik discussed the current status of the common European currency, which has survived major crises over the last decade with Nicola Borri, an economics and finance professor at Rome's LUISS University.

Sputnik: What's your take on the current status of the euro?

Farewell to Greenbacks? EU Challenges Dollar Dominance With 'Stronger' Euro
Nicola Borri: The euro is in peril and at a crucial stage of its short life. When a number of European countries decided to adopt a single currency, the idea was that a common currency would have helped not only trade and economic growth, but also strengthen political cohesion and ensure peace in Europe. Instead, in many countries now large parts of the populations think that the Euro is responsible for weak growth, rising inequality and poverty and tensions between different countries, for example, richer and poorer countries, are rising. It's a crucial stage because only significant changes in European institutions could save it.

Sputnik: Have the economies of the countries that adopted the euro won or lost as a result?

Nicola Borri: In my opinion, countries benefited from the Euro. First, borrowing rates dropped also for poorer countries. Second, poorer countries were able to borrow more than in the past. Third, the common currency and a strong common central bank were able to limit the damages of the financial crisis.

Sputnik: What's your take on the financial status of the Eurozone in light of fiscal difficulties in Italy? Do you agree that the economies of Italy and Greece were stronger without the euro?

EU Should Expand Use of Euro in Energy Deals With Third Countries - Commission
Nicola Borri: I disagree with the statement that economies like Italy, or Greece, were stronger without the euro. The euro brought huge advantages to these economies, with lower borrowing costs and monetary credibility. Unfortunately, these economies did not use this opportunity to reform their weak economies. The problem of these economies is structural: low level of education of the workforce, low competition, and high taxes on labour are responsible for the very low growth rate of productivity. This is the real problem of these economies.

Sputnik: Which countries tend to benefit and which appear to be losing because of the euro? Would they be better off using their own currencies?

Nicola Borri: Probably, the countries who benefited the most so far are the ones in the euro-periphery: like Italy, Spain and Greece. However, if these countries do not address their structural problems (see my point above), they could also be the one who will lose the most in the future. In fact, having their own currencies could give them a quick temporary fix to the low productivity problem by devaluing their own currency and increase exports. However, currency devaluation is a dangerous instrument to use. Markets and investors learn quickly and anticipate devaluation policies so that usually inflation starts to rise, as we see for example in Argentina.

Sputnik: How would a switch to the euro affect the Balkan states that are looking to join the European Union?

Nicola Borri: The Balkans states would enjoy a similar experience to that of countries like Italy, Spain and Greece right after the adoption of the Euro, in 1999. This means dropping borrowing rates and large inflows of foreign capital. However, Balkan states should also learn from the past mistakes of countries like Italy, or Greece, and use these resources to improve the productivity of their economies.

000000
Popular comments
"The euro brought huge advantages to these economies, with lower borrowing costs and monetary credibility." Yes, great advantage for Italy, paying already 92,5 billion Euro in interests every year. But don't mention the debt, it might lead us to usury. "the countries who benefited the most so far are the ones in the euro-periphery: like Italy, Spain and Greece". This economy professor probably thinks also that "ignorance is strength". What's the LUISS university? Libera Università Internazionale degli Studi Sociali. In English: Free International University of Social Studies. Doesn't this remind us of the Institute for Social Research? Founded by "businessmen and bankers", LUISS is another globalist tool created to accompany the mutation of communism into neo-liberalism.
ikeo
31 December 2018, 10:29 GMT
000000
The Euro is just a great tool to concentrate control. Whenever it is stated i.e. Greece or Italy have borrowed this or that huge amount of money, then, in the background, you will easily find out, that not Greece or Italy have borrowed, but the international NWO banks like Goldman Sucks and all the other bank mongers. Thus it does not matter, how many billions of printed paper money you lend to Greece - it will never land in the country but more likely in the pockets of the bankers. Just to illustrate, Greece has a total population of 10 million citizens, from this only 4 millions are in an employment, at an average wage of 1.000,- Euro per month. Now you may guess, where all the BILLIONS of Euro credits have been drained away? Source: tradingeconomics.com/greece/population
Salorius
31 December 2018, 12:15 GMT
000000
Newsfeed
0
New firstOld first
loader
LIVE
Заголовок открываемого материала
Access to the chat has been blocked for violating the rules . You will be able to participate again through:∞. If you do not agree with the blocking, please use the feedback form
The discussion is closed. You can participate in the discussion within 24 hours after the publication of the article.
To participate in the discussion
log in or register
loader
Chats
Заголовок открываемого материала
Worldwide
InternationalEnglishEnglishMundoEspañolSpanish
Europe
DeutschlandDeutschGermanFranceFrançaisFrenchΕλλάδαΕλληνικάGreekItaliaItalianoItalianČeská republikaČeštinaCzechPolskaPolskiPolishСрбиjаСрпскиSerbianLatvijaLatviešuLatvianLietuvaLietuviųLithuanianMoldovaMoldoveneascăMoldavianБеларусьБеларускiBelarusian
Transcaucasia
ԱրմենիաՀայերենArmenianАҧсныАҧсышәалаAbkhazХуссар ИрыстонИронауОssetianსაქართველოქართულიGeorgianAzərbaycanАzərbaycancaAzerbaijani
Middle East
Sputnik عربيArabicArabicTürkiyeTürkçeTurkishSputnik ایرانPersianPersianSputnik افغانستانDariDari
Central Asia
ҚазақстанҚазақ тіліKazakhКыргызстанКыргызчаKyrgyzOʻzbekistonЎзбекчаUzbekТоҷикистонТоҷикӣTajik
East & Southeast Asia
Việt NamTiếng ViệtVietnamese日本日本語Japanese俄罗斯卫星通讯社中文（简体）Chinese (simplified)俄罗斯卫星通讯社中文（繁体）Chinese (traditional)
South America
BrasilPortuguêsPortuguese
NewsfeedBreaking
08:39 GMTAustralia Trade Minister Looks Forward to Meeting With French Colleagues Amid Sub Deal Row
08:38 GMTVolcano Eruption on Spanish Island of La Palma Forcing Evacuations
08:06 GMTMen Sleep Worse During Waxing Moon, Women Unaffected – Study
07:58 GMTEmmy Awards 2021: Big Winners, 'Hollywood's Most Hated Man' and #SoWhite Controversy
07:30 GMTIndia: Uproar Over Arrest of BJP's Kirit Somaiya in Maharashtra For Accusing Minister of Corruption
07:10 GMTFinnish PM Embroiled in Product Placement Controversy Over Instagram Story
07:05 GMTEight Killed as Gunman Goes on a Shooting Spree at Russia's Perm University
06:27 GMTCanada Set to Deliver Verdict in Testy Vote as PM’s Cakewalk Becomes Nail-Biter
06:17 GMTTaliban Order Women Working in Kabul to Stay at Home, Interim Mayor Says
06:12 GMTSweden Raises Taxes to Finance Largest Military Investment in Modern Times
06:01 GMTBoJo Vows UK’s ‘Ineradicable’ Love of France in Bid to Mend Fences Amid Diplomatic Row Over AUKUS
06:00 GMTBritain Considers Offering Loans to Energy Firms Amid Dramatic Hike in Gas Prices - Report
05:29 GMTRussia’s Ruling Party Ahead in Parliamentary Vote With Over 48%, Election Commission Says
04:34 GMTLive Updates: UK PM Johnson to Push Joe Biden to Lift COVID-19 Travel Ban With US
04:30 GMTNot in the Mood: Golden Retriever Does Not Want to Cuddle
04:28 GMTChinese Observers Give Positive Assessment of Russian State Duma Election
03:45 GMTMusk Adds Another Joke to Joe Biden’s ‘Sleepy’ Issue, When Asked About ‘Inspiration4’ Flight
03:16 GMTKhamenei Appoints New Head of Iranian Air Force
03:16 GMTWait, Again? New Photo of Trudeau Wearing Blackface Emerges on Social Media
02:41 GMT‘Duty of Care’: Texas Doctor Performs Abortion Past 6-Week Law to Protest State’s ‘Heartbeat Bill’