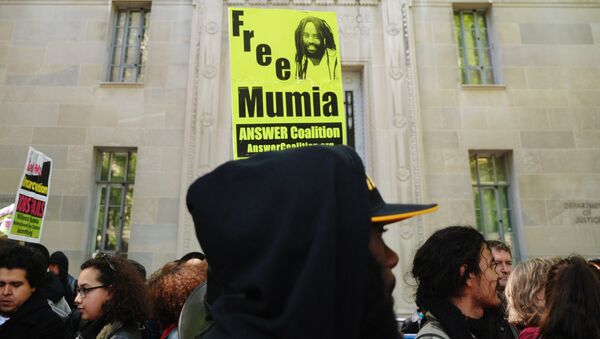 © AFP 2021 / MANDEL NGAN
Subscribe
The move by a Philadelphia judge to reinstate Mumia Abu-Jamal's appeal rights is paving the way for his possible release and setting a precedent for other political prisoners, Jacqueline Luqman, co-editor-in-chief of Luqman Nation, told Sputnik.

Abu-Jamal was granted another chance to appeal his 1981 murder conviction in the death of Philadelphia police officer Daniel Faulkner on Thursday by Common Pleas Judge Leon Tucker, who ruled that former State Justice Ronald Castille's failure to recuse himself from Abu-Jamal's past appeals created the impression of courtroom bias.

Tucker's ruling was in response to a recent argument made by Abu-Jamal's legal team that proposed that Castille, who previously served as the Philadelphia district attorney at the time of Mumia's conviction, was improperly involved in Mumia's later appeals when Castille became a state Supreme Court Justice.

​"This is really an exciting development, and it's very hopeful because people who are not familiar with the case don't know that Mumia has been held in isolation, on death row, for 30 years," Luqman told Radio Sputnik's Loud & Clear on Friday.

"That's not unprecedented in this country."

"All of this has always had a really heavy cloud of racial bias and the government destroying black movements and punishing black people for being involved in those movements, and just the fact that Mumia was able to get this pushed to get a new trial is enormous," she added.

"There are photos that emerged several years ago, showing how police manipulated the evidence at the scene of the shooting," he said. "The original court case was clearly tainted in my view."

Abu-Jamal's death row sentence was thrown out in 2011 over flawed jury instructions, leaving prosecutors to instead agree to a sentence of life in prison. His last appeal was rejected by the Pennsylvania Supreme Court the following year.

"We'll be watching this case, and we're really hopeful that it doesn't just free Mumia, but sets a precedent for all of the other political prisoners who we've been trying to fight for their release," Luqman said.

000000
Popular comments
Wesley Cook , abu jabber's real name, is right where he belongs; behind bars where he can be gawked at with the other animals.