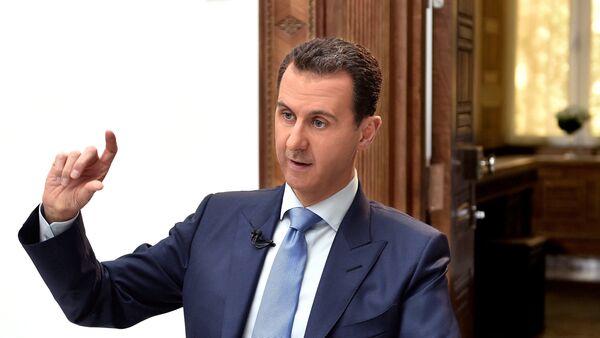 Pullout of US Troops From Syria Should Be ‘Catalyst for Peace’ - Iraqi President
According to the press service, the adviser delivered a letter from Iraqi Prime Minister Adel Abdul Mahdi to the Syrian president. The letter calls for the cooperation between the two countries, as well as notes the importance of coordination of mutual efforts against terrorism, especially in the border region between the two countries.

The press service noted that the participants of the meeting had exchanged their opinions on the situation in the region and in the world. Assad acknowledged the positive changes in the Middle East, such as stabilization of the situation in the Iraqi and Syrian cities and return of the safety to the region. The Syrian president explained this by the willingness of the Middle Eastern nations to protect their sovereignty, despite foreign interference.

Iraqi President to Visit Damascus First Time Since Start of Syrian War - Source
On December 18, an Iraqi diplomatic source told Sputnik that Iraqi President Barham Salih may soon pay an official visit to Damascus for the first time since the start of the Syrian civil war back in 2011. In October, Iraqi Foreign Minister Ibrahim Jaafari conducted an official visit to Damascus.

The countries of the Arab League are now rebuilding its diplomatic relations with Syria. On December 27, the United Arab Emirates reopened its embassy in Damascus for first time in seven years, and it is the first Persian Gulf country to return its embassy to Syria. Earlier this month, Sudanese President Omar Bashir was the first Arab League country leader to visit Syria in eight years.