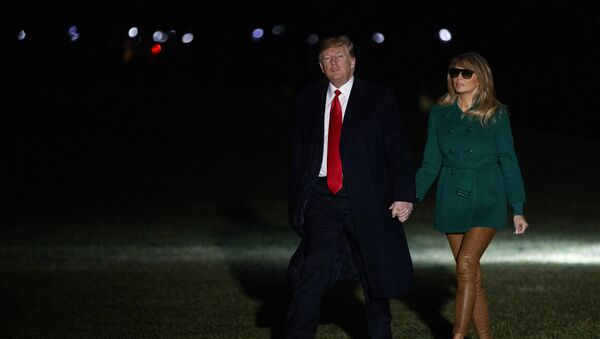 © AP Photo / Evan Vucci
Subscribe
The US First Lady joined her husband during an unannounced visit to the country’s troops in Iraq. Before the trip the media was all over Donald Trump, with rumours circulating that he would be the first president since 2002 not to visit soldiers on Christmas, but after the journey his wife came under scrutiny for a suspected wardrobe faux pas.

Melania Trump’s clothing choice has prompted a wave of jokes and sarcasm on Twitter as some users claimed she had forgotten to put on a key piece of her ensemble while on the president's first visit to troops stationed in a conflict zone during his two years in office.

The men and women who serve in our nation’s military give up so much so that we can be free. @potus and I were honored to surprise deployed troops at Al Asad Air Base in Iraq. 🇺🇸 pic.twitter.com/isLZT5S7YV

​As she and Donald Trump rounded off their journey to the Al Asad Airbase in Iraq and returned to Washington after a short stop at the Ramstein Airbase in Germany early on 27 December, the first lady opted for a green belted jacket, oversized sunglasses despite it being dark and early in the morning, and leather pants. The shade of the pants, which matched her skin tone perplexingly well, made some netizens ask themselves whether Melania Trump had gotten off Air Force One without pants at all.

I love #Melania's coat but it needs pants or a skirt with it. https://t.co/fhafKd8X82

Am I the only one who thought that @FLOTUS was walking around pants-less? #MelaniaPants pic.twitter.com/5OPVwEBLdS

Melania just looks odd. Are we certain that’s her? Bad judgment fits. With sunglasses and without pants…

Hey, Melania, read the sign:
no pants, no shoes, no service.#NopantsNoshoesNoservice

​Another user made reference to some recent events involving Melania’s husband’s deeds in the White House.

​However, others fended off the criticism praising Melania for her sense of style

These people and this magazine are jealous that Melania is smart, beautiful and can wear skin tone leather pants@FLOTUS looks amazing as per usual 😍 https://t.co/DZSsT2JWig

This wasn't the only thing that Melania was mocked for over the course of the three-hour drop-in at the US base in Iraq. Some joked about her trading her standard high-heels for Timberland boots while visiting the troops — something that her critics deemed inappropriate. She was also laughed at for her kiss with her husband, which some observers called "ridiculous".

"A public display of affection between Trump and Melania is a rare event and this cheek kiss looks awkward and lacking in symmetry", said body language expert Judi James in an interview with the Daily Mirror.

This is not the first time that Melania has become the centre of a “clothing controversy”: in October, the FLOTUS donned a white pitch helmet while sitting in a safari vehicle. Given that it happened in Africa, a continent still recovering from colonialism, Melania was ridiculed for her perceived reflection of European explorers and conquerors. This summer, media and social networks exploded in outrage after she wore a designer khaki jacket with a print on the back reading: "I really don't care, do u?" as she departed to visit a migrant child centre in Texas. Some suspected that it was a "hidden message", although her spokesperson Stephanie Grisham dismissed all the allegations, saying that it was just a piece of clothing.

Dorado187
28 December 2018, 17:16 GMT1
000000
Interesting that so many Men suddenly have taken notice in This first Lady. I must say she does spark a sense of sophistication and beauty.