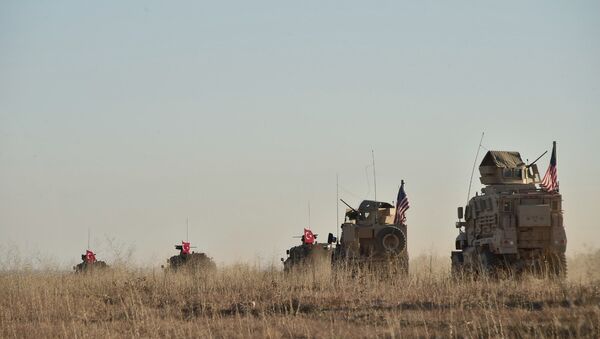 Last week, President Donald Trump announced the withdrawal of US from Syria, posting on Twitter that the US had defeated the Daesh terrorist group in the Arab country.

The reasons for the US decision to withdraw troops from Syria, as well as Washington's future plans in the Middle East, are not yet known, Russian Foreign Ministry spokesman Igor Tsarikov said on Thursday.

"We have repeatedly pointed out that the US illegitimate armed presence in Syria is an obstacle to settlement. However, we still do not know anything about the reasons for this decision of the future plans of the US. This gambit has yet to be figured out", Tsarikov told a joint extended meeting of Russian and Syrian interdepartmental coordinating committees on the return of Syrian refugees.

The statement came after a CNN report citing several Pentagon sources as saying last week that outgoing Defence Secretary James Mattis had signed an order to withdraw US forces from Syria.

This came as Mattis wrote a resignation letter, in which he stated that Donald Trump has a right to have a secretary of defence "whose views are better aligned" with those of the US president.

'US Must Realise They Didn’t Get What They Want in Syria' - Think-Tank Director
Mattis announced his resignation last Thursday, a day after Trump decided to withdraw roughly 2,000 US troops from Syria, posting on Twitter that the United States had defeated the Daesh terrorist group in the Arab country.

In late March, Trump said that the US would "very soon" withdraw its troops from Syria, though the Trump administration later explained that it would be keeping forces in Syria until Daesh is defeated.

The US-led coalition continues to launch airstrikes on Daesh positions in Syria, in a campaign that was not approved by either the UN or the Syrian government.