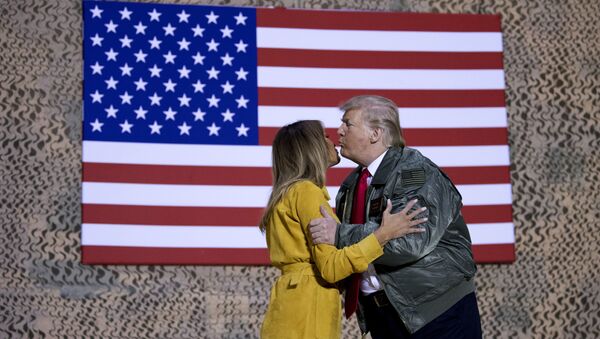 After his recent decision to withdraw US troops from Syria, Donald Trump visited a military base in Iraq. Surprisingly enough, attention of the US media was largely focused on the trivia, including an "awkward" kiss between the Trumps, as well as Melania's fashion choice.

Donald and Melania Trump made a holiday trip to the Iraq-based Al Asad Air Base on Wednesday — the president's first visit to troops stationed in a conflict zone during his two years in office.

The POTUS made it clear that he doesn't want his country to remain "the policeman of the world" and described the US' worldwide military presence as "ridiculous".

However, it was not only his political statements that stirred hot debate in the United States: another Boxing Day newsmaker was the First Lady, specifically her footwear choice and her kiss with the hubby, which some observers called "ridiculous".

"A public display of affection between Trump and Melania is a rare event and this cheek kiss looks awkward and lacking in symmetry", said body language expert Judi James.

"Again their approaches are different, with Trump clutching his wife's upper arm tightly enough to make his knuckles whiten while Melania appears to barely lay her splayed hand on his bicep with no sign of holding or clutching.

Melania appears to keep their torsos apart as they kiss, stretching her neck in to achieve face-closeness instead", she went on, claiming that this kissing style would be a norm for a greeting or farewell kiss between colleagues or friends, rather than spouses.

Intimacy aside, Melania was widely mocked on social media for trading her usual high heels for Timberland boots while visiting the troops — something that her critics deemed inappropriate.

Why is Melania wearing clunky Timberlands to walk from the limo to the chow hall?

This is not the first time that Melania has come under fire for how she dresses in public: in October, the FLOTUS donned a white pitch helmet while sitting in a safari vehicle. Given that it happened in Africa, a continent still recovering from colonisation, Melania was ridiculed for her perceived image of European explorers and conquerors.