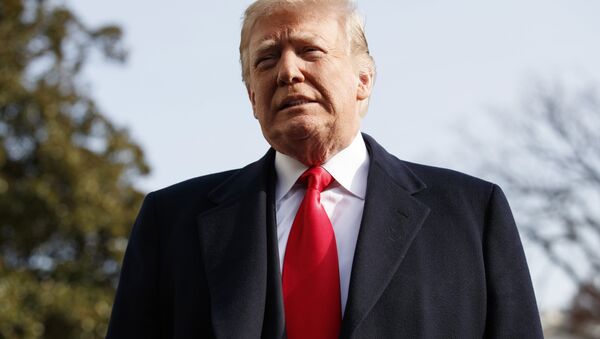 CAIRO (Sputnik) – A meeting between Iraqi Prime Minister Adel Abdul Mahdi and US President Donald Trump, which was planned to be held during the latter’s visit to the Middle Eastern country, was cancelled and subsequently replaced by a phone call due to disagreements on the organization of the talks, the Iraqi government said.

"An official reception and a meeting between the chairman of the Council of Ministers, Adel Abdul Mahdi, and the US president were planned to be held. However, a disagreement on the organization of the meeting has led to it being replaced by a telephone conversation," the Iraqi government’s press service said in a statement.

President Trump, First Lady Make Surprise Visit to US Troops in Iraq (PHOTOS)
The cabinet noted that Washington had notified Baghdad about Trump’s visit to Iraq late on Wednesday.

The statement added that during the call, Abdul Mahdi and Trump had discussed the developments in the region, especially in the light of the US decision to pull out forces from Syria. The Iraqi prime minister and the US president also covered cooperation in fighting the Islamic State terror group (Daesh).

Trump invited Abdul Mahdi to Visit Washington. The Iraqi prime minister, in his turn, invited Trump to pay a visit to Baghdad.

On Wednesday, the White House spokeswoman, Sarah Sanders, said the US president and First Lady Melania Trump visited US troops in Iraq late on Christmas night.

READ MORE: 'We Share Values and Culture': Iraq’s FM on Trade With Iran Amid US Sanctions

Trump's first overseas trip to a combat zone took place in the wake of his announcement that the United States would pull out its forces from Syria due to the defeat of the Daesh terrorists in the war-torn country.