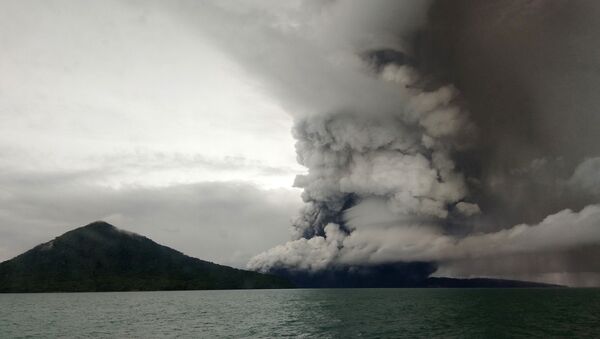 MOSCOW (Sputnik) - Indonesian authorities on Thursday raised the alert level for Anak Krakatoa volcano, which is situated in the Sunda Strait between Java and Sumatra, to the second-highest degree amid its growing activity, The Jakarta Post reported.

According to The Jakarta Post, the authorities also recommended that locals and tourists not be allowed within a radius of 3 miles from the crater of the volcano.

​Indonesia has ordered all flights to be rerouted as volcano alert level has been raised.

​According to The Jakarta Post, insurance companies have counted at least 191 insurance risks from the disaster in Lampung and Banten provinces.

The tsunami, which was triggered by a volcano eruption, struck the Indonesian coast at 14:27 GMT on Saturday. The death toll following the disaster reached 430 people, and nearly 1,500 were injured.