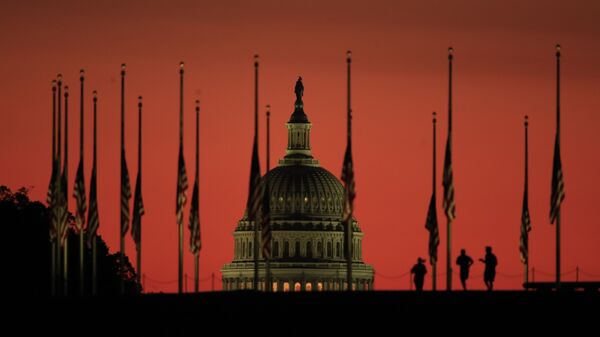 The US House of Representatives and Senate adjourned on Thursday, paving the way for the current partial government shutdown to continue into the new year, when Democrats are taking control of the House.

Although both bodies of Congress returned to work on Thursday, the brief session signaled that little, if any, progress had been made toward settling a spending bill stalemate between Congress and the White House, which is demanding $5 billion to fund US President Donald Trump's vision of a border wall along the US' southern border with Mexico.

The office of House Majority Whip Steve Scalise sent out a notice early Thursday, notifying members that "no votes are expected in the House this week." The notice went on to explain that a 24-hour notice would be given should things change.

And things aren't looking any better for the Senate, according to a tweet shared by the Senate Press Gallery.

"The Senate adjourned at 4:04 p.m. and will reconvene at 10 a.m. Monday, December 31 for a pro forma session only," the Thursday tweet reads. "The Senate will then adjourn until 4 p.m. Wednesday, January 2, and will resume consideration of H.R. 695, the resolution to continue federal spending."

Although POTUS has repeatedly voiced his discontent at a government shutdown, he has stressed that he has no plans to sign a spending bill that doesn't include his requested funds.

White House spokesperson Sarah Huckabee Sanders recently doubled down on the stance, saying in a Thursday statement that 45 "will not sign a proposal that does not first prioritize our country's safety and security."

Currently, more than 320,000 federal government workers have been on furlough, while thousands of others are being forced to continue working without pay. To this end, the Office of Personnel Management (OPM) on Thursday took to Twitter, posting a link to a letter template that federal workers can use to explain their situation to creditors, mortgage companies and landlords.

​"I am a Federal employee who has recently been furloughed due to a lack of funding of my agency," one sample letter offered by the OPM states. "Because of this, my income has been severely cut and I am unable to pay the entire cost of my mortgage, along with my other expenses."

The letter also suggests that affected workers should reach out to a personal attorney for legal advice as the OPM is not qualified in doing so. According to Reuters, the templates were created during a government shutdown in 2013.

And while the shutdown is hitting federal workers hard, it's likely to take a dig at Washington's tourism, since various sites, such as Smithsonian museums and the National Zoo will be shuttered should things continue past January 2.

Trump's $5 billion demand for the border wall was previously included in a House-passed bill, but that piece of legislation didn't make it through the Senate by the deadline on December 21, according to the Washington Examiner, which noted that rejected spending bills have only offered up between $1.3 billion and $1.6 billion for border security.