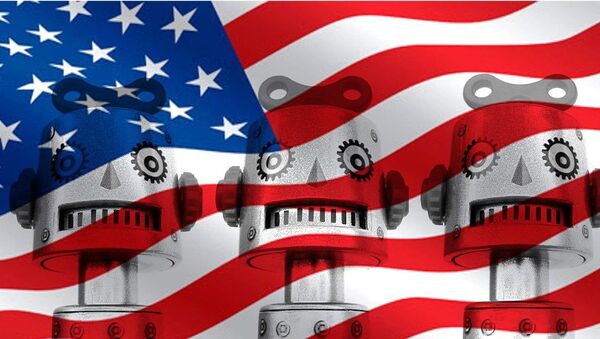 One of the authors of a major report on alleged Russian social media meddling during the 2016 elections, Jonathon Morgan, has been banned from Facebook following revelations that the company he serves as a CEO of - New Knowledge - staged a “false flag” operation during the 2017 special election in Alabama.

Four other accounts run by "multiple" people were also banned, but it isn't clear which accounts they were. "There's really no transparency from Facebook," documentary filmmaker and RT America correspondent Dan Cohen, who published an explosive article on the New Knowledge influence operation in Alabama recently, told Radio Sputnik's Loud & Clear.

"Who knows what else those four Facebook accounts reveal about this operation or other operations. I'm guessing we saw a very small amount of what happened here. You know, when there's smoke there's fire," Cohen added.

New Knowledge's report on the alleged Russian operation was touted on both sides of the aisle of the Senate Intelligence Committee, for whom the report was prepared.

Committee Chairman Sen. Mark Warner (D-IN) called the report a "bombshell" and "wake up call." Ranking Republican Richard Burr (R-NC), called it "proof positive that one of the most important things we can do is increase information sharing between the social media companies who can identify disinformation campaigns and the third-party experts who can analyze them."

The reports' author — New Knowledge — was recently revealed to have "orchestrated an elaborate ‘false flag' operation that planted the idea that the Moore campaign was amplified on social media by a Russian botnet," an internal report from the company obtained exclusively by the New York Times says.

Morgan, the CEO of the company, had previously — during the height of the campaign — blamed "Russian trolls" for seeking to influence the election as New Knowledge did exactly that, Sputnik News reported.

Morgan also helped start the Hamilton 68 Dashboard, a tool which claimed it tracked Russian trolls. However, it does no such thing and one of the project founders, Clint Watts even said he was "not convinced on this bot thing."

In fact, according to Watts, unnamed people on the project didn't even believe the accounts were "commanded in Russia — at all. We think some of them are legitimately passionate people that are just really into promoting Russia."

"We developed some techniques for determining who matters in a conversation," Morgan said of the dashboard's methodology. "Using some of those techniques, we've identified a subset of accounts that we're very confident are core to furthering the Russian narrative in response to mainstream events."

In another interview, Morgan informed Americans how they can tell whether they have been misled by Russian disinformation: "If it makes you feel too angry or really provokes that type of almost tribal response, then it may be designed to manipulate you… People should be concerned about things that encourage them to change their behavior."

Morgan is "basically a career spook who came up through the Obama White House and State Department, acting as an advisor; founded a series of startups using USAID and funds from the Omidyar Network," Cohen told Loud & Clear hosts Brian Becker and John Kiriakou. "And then he founded this group called New Knowledge, and thanks to a massive investment from ventures capitalists, he was able to basically manipulate the 2017 special [Senate] elections to replace Jeff Sessions in Alabama."

The race was hotly contested by the two candidates: "centrist" Democrat Doug Jones and "far right Christian theocrat" Roy Moore. Jones narrowly beat Moore, but "we'll never know how much this cyber meddling operation that Morgan and New Knowledge — what the impact was," Cohen said.

Nonetheless, New Knowledge's impact is clear and significant in the case of the Senate report it authored with innumerable articles breathlessly covering its contents. That's despite the assessment of the news site Foreign Policy, which profiled an analyst at New Knowledge and included the caveat that New Knowledge's "method of analysis is in its infancy, remains a fairly blunt instrument, and still requires human intervention. It sometimes mistakes real people who post anti-imperialist arguments about US foreign policy for Kremlin trolls, for example."

It's also "important" to note that New Knowledge primarily concerns itself with private affairs, Cohen said. "They serve the private sector, so if you're an oil or gas corporation who does fracking or something like that, and you're getting criticized online, you can hire your New Knowledge to smear your critics as Russian bots."