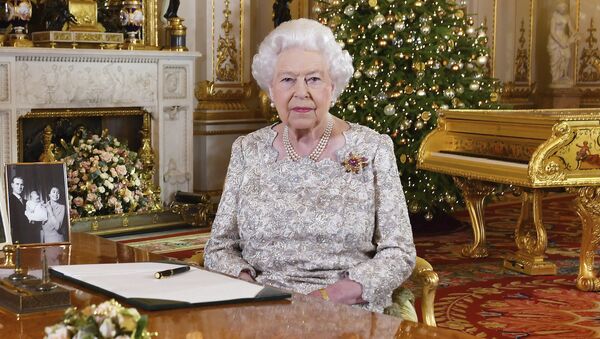 The Queen generally avoids making political statements, and she often is praised for keeping the veil of neutrality on amid political turmoil. This year, however, Her Majesty was panned for speaking about generosity and self-sacrifice from what looks like a swanky room with furniture clad in gold.

Queen Elizabeth II delivered a warm-hearted Christmas Day speech to a divided nation at a time when her own family is said to be moved by a growing rift.

The 92-year-old monarch, who has been reigning as the Queen of the United Kingdom and the Commonwealth since 1952, said that 2018 was a "busy year for her family".

"With two weddings and two babies, and another child expected soon, it helps to keep a grandmother well occupied," she joked, referring to Meghan Markle, the newly-minted Duchess of Sussex and Prince Harry's wife, who is expected to give birth in spring.

"Even the power of faith, which frequently inspires great generosity and self-sacrifice can fall victim to tribalism," Her Majesty went on. "But through the many changes I have seen over the years, faith, family and friendship have been not only a constant for me, but a source of personal comfort and reassurance".

The Queen also paid tribute to the Commonwealth, which she said had seen massive growth over the past several decades.

She got into the Christmas spirit towards the end, stressing the importance of the message that Jesus Christ carried. "I believe his message of peace on earth and good will to all is never out of date. It can be heeded by everyone. It's needed as much as ever".

Despite the conciliatory tone of her address, some people were apparently not impressed. Commenters pointed to the lavish atmosphere of Buckingham Palace, the Queen's residence, particularly the antique golden piano in the background.

Privileged wealthy hereditary monarch bunged £76m a year, sitting in front of a golden piano in the palace she's billing taxpayers £369m to tart up, kills satire by lecturing the nation to pull together https://t.co/28ft4GGL3q

I have so much in common with someone who owns a gold piano and whose living room is five times the size of my council house.

I expect we'd all be more sanguine about Brexit if we could put our feet up on our gold encrusted furniture and have subservient lackeys mix Gin & Tonics we don't have to pay for. #ScotRef #brexit

#QueensSpeech
Unless the queen is to announce that she'll be selling her millions of pounds of personal jewels and gifts in order to house her rough sleeping subjects instantly, I'll be giving it a miss today Queenie.👍 pic.twitter.com/g6rSf6btab

"No way! I've got the exact same gold piano in my sitting room. Amazing how similar we are," a user noted with almost palpable irony.

"Divided? Yes people that own a golden piano and people that don't," wrote a user under the handle İlhan Evlat‏.

Others leapt to the Queen's defence, saying that they were cool with their monarch living in a palace.

Yes, I’m shocked — shocked — to discover that the Queen lives in a palace that contains museum quality furniture. Who ever would have imagined that?

She is the queen for god sake

Guys, she lives in a bloody great palace in the centre of London and she appears on every bank note, the Royal family are as far away from ordinary as is possible. A gold piano doesn’t increase that one bit