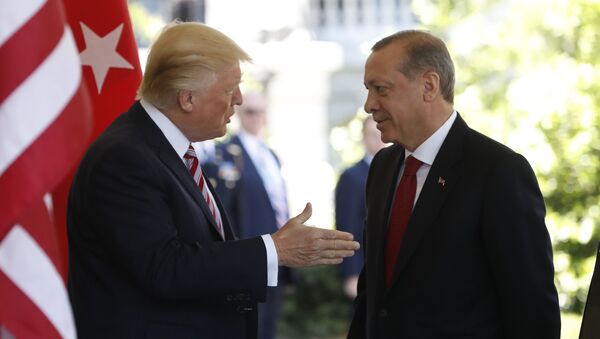 “Our president invited honourable [US President] Trump to visit Turkey. He responded that he might come in 2019,” Erdogan’s spokesman Ibrahim Kalin told reporters in Ankara on Monday.

White House spokesman Hogan Gidley said in a statement that they had received the invitation; noting, however, that it was too early to speak of any plans.

“While nothing definite is being planned, the President is open to a potential meeting in the future,” he said.

US Pulling Troops Out of Syria Due to Failed MidEast Policy - Syrian Ambassador
READ MORE: Turkey Reportedly Redeploys Troops to Border With Syria Amid US Pullout

The two leaders held a phone call earlier on Sunday to coordinate their efforts at preventing an authority vacuum from developing as the United States withdraws from Syria. Erdogan welcomed Trump’s abrupt decision last week to withdraw American troops, which removed a source of friction between the two countries.

A senior US official told Reuters that Trump had not discussed the decision to withdraw with Erdogan in advance.

US military officials will visit Turkey this week to discuss the details of the troops’ withdrawal with their counterparts, a spokesman for Erdogan said on Monday. They will also discuss further coordination on possible future military operations in northwest Syria as well as security issues, Pentagon spokesperson Heather Babb later told Sputnik.

“I can confirm that there will be meetings this week in Turkey… The United States and Turkey are coordinating actively on all issues affecting both Turkish security and the situation in northeast Syria. I will not get into details of those discussions," Babb said.