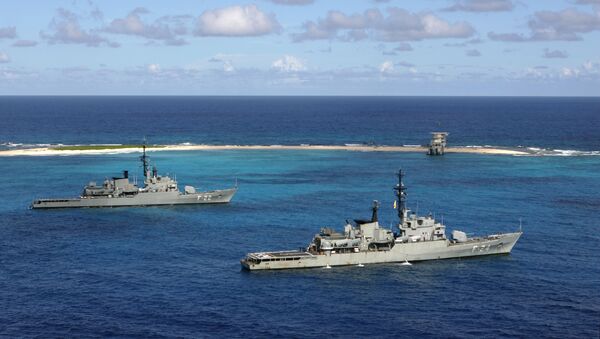 MEXICO CITY (Sputnik) - Caracas has strongly renounced Washington’s response to reports about the interception of an ExxonMobil oil exploration vessel by the Venezuelan authorities, Venezuela’s Foreign Ministry said on Tuesday.

"The government of the Bolivarian Republic of Venezuela categorically rejects the statement by the US State Department on the sovereign actions on December 23 by the Bolivarian Navy for the strict protection of Venezuela’s non-disputed waters," the ministry said in a statement.

Guyana’s ships at the moment of interception were in the delta of the Orinoco River Delta, meaning that they could not have been in the exclusive economic zone of Guyana, according to Caracas.

The Venezuelan Foreign Ministry further urged the US authorities "not to interfere in the affairs of sovereign states and to deal with their own internal problems."

The ministry's remarks come a day after the US State Department called on the Venezuelan authorities to respect the "sovereign rights of neighboring countries" to explore resources in their territorial waters and exclusive economic zones.

Colombia Won't Succumb to Venezuelan Provocations - MoD on Tu-160 Arrival
Late on Saturday, Guyana's Foreign Ministry said that the Bolivarian Navy of Venezuela had intercepted an oil exploration vessel that was operating within the country's territorial waters under the Bahamian flag and on behalf of the US ExxonMobil oil and gas corporation. Caracas, in turn, insisted that there were not one but two oil exploration vessels and they had illegally crossed the Venezuelan border.

The incident took place in the disputed territories that are referred to by Venezuela as Guayana Esequiba, which has been claimed by both countries since 19th century. Tensions between Caracas and Georgetown escalated in 2015 when Guyana granted a license to US ExxonMobil corporation to explore the oil-rich region.