Ekaterina Blinova
All materialsWrite to the author
The US' exit from Syria might have been prompted by purely financial factors, Syrian analysts told Sputnik, explaining how the withdrawal will affect Turkey, Saudi Arabia, Israel and Washington's European allies who continue to maintain a limited military presence on the ground in the Arab Republic.

Donald Trump's announced pull-out of American troops from Syria caught many by surprise, although the US president repeatedly vowed to withdraw military forces at some point.

However, in early September, US Special Representative to Syria James Jeffrey made it clear that US military forces were "no longer pulling out by the end of the year". For its part, The Washington Post signalled that the Trump administration had set new goals for its military contingent in the region and would keep the 2,200 US troops there "indefinitely".

​The question then arises whether Trump has just delivered on his promise to pull out once Daesh* is defeated or whether there were specific conditions on the ground that prompted the sooner-than-expected withdrawal.

"We can speculate and come up with many reasons; the most important of which for a fiscal pragmatist like Trump is perhaps the actual financial cost factor," Ghassan Kadi, a political analyst of Syrian origin, told Sputnik. "Trump does not seem prepared to engage in military action unless someone else is paying for it, and this is not the case in Syria. The guy is a businessman and runs the US like a corporation with a profit and loss statement and investors to please".

According to Kadi, this approach "is not necessarily a bad thing for the world because previous administrations have squandered trillions of American tax payer money on destroying the world and achieving little else".

He noted that nothing had really happened on the ground recently to instigate such a move "unless Trump and Erdogan struck an under-the-table deal".

I just had a long and productive call with President @RT_Erdogan of Turkey. We discussed ISIS, our mutual involvement in Syria, & the slow & highly coordinated pullout of U.S. troops from the area. After many years they are coming home. We also discussed heavily expanded Trade.

Ex-NATO Commander Questions Trump Rationale to Withdraw US Troops From Syria
However, according to Kadi, "unless Trump promised to surrender his positions to Turkish troops, his withdrawal from Syria will leave Turkey in a position of disadvantage in Idlib".

For his part, Christopher Assad, a Canada-based political analyst of Syrian origin, presumed that Trump was obviously disenchanted by the fact that US overseas operations in Syria, Iraq and Afghanistan failed to benefit the US in any capacity.

"The fact of the matter is that he discovered, almost two years into his presidency that his generals were full of hot air", Assad said. "His clues were clearly visible in Syria, Iraq and Afghanistan, where the US forces have not made any progress in 'neutralising' these countries and have not brought them any closer to agreement with US policy in the region."

On the contrary, the analyst highlighted "the military's decision to arm and support the Kurdish secessionists in northern Syria actually threatened in making another US enemy in the region out of Islamic Turkey, as if that was possible".

US May Leave Syria, But It Won't Pull Out of Qatar, Persian Gulf

Both analysts called attention to the fact that even if the US entirely exits Syria it will continue to maintain a military presence in Qatar and the Persian Gulf.

"After all, America is in a state of attrition, and I don't believe that it will have the financial means to upkeep the same level of military presence it has abroad for much longer. That said, don't believe that the US will be leaving its Qatar base and naval positions in the Gulf any time soon," Kadi said.

According to Assad, "it also goes without saying that Trump's role as president is to keep his Empire's economy above water".

"Therefore, although he may remove troops out of Afghanistan, specially that Pakistan had recently cooled off her military and intelligence cooperation, he will not under any circumstance withdraw completely form the Arab Middle East because Iran is so squarely in the US military sites and remains the most coveted target of Empire". 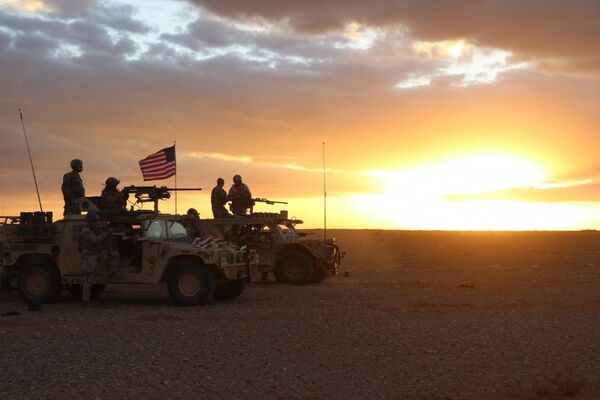 While the US military contingent is leaving the Syrian Arab Republic within the next 100 days, French President Emmanuel Macron has promised that "France will remain engaged in the Levant region".

US Pulling Troops Out of Syria Due to Failed MidEast Policy - Syrian Ambassador
Reportedly, Paris has also pledged to support Kurdish militia in northern Syria amid the American withdrawal.

"As for France, I could sarcastically say that Macron can better use his troops in the Avenue des Champs-Élysées", Kadi said, commenting on the issue.

"France is a nuclear power and a permanent member of the UNSC, but it does not any longer have the geopolitical and military clout it thinks it has. If France decides to replace America in Syria, how would it imagine that it can be capable of success where America failed?" he asked rhetorically.

According to the political analyst, "Russia is the only power that has the respect and trust of all relevant parties" to "sponsor fair and proper mediations".

How the US Withdrawal From Syria May Affect Regional Players

So, how might the US pull-out affect America's regional allies — Saudi Arabia, Israel and Turkey?

"I cannot see how the pull-out can affect Saudi Arabia as such," Kadi said, adding that Riyadh is currently preoccupied with its domestic affairs and the media fuss over the murder of Saudi journalist Jamal Khashoggi.

As for Israel, the analyst elaborated that "prior to Trump's decision to pull out of Syria, [his] guess was that America was going to use its presence on Syrian soil as a bargaining chip to guarantee Israel a trade-off that eventually guarantees a mutual and synchronised American/Iranian withdrawal".

"If Trump is true to his word, this is now an unlikely scenario," Kadi suggested. "A unilateral American pull-out can weaken Israel's position and leverage in negotiating an Iranian withdrawal. However, this will further bolster Russia's position as the only power that can broker future peace talks."

Assad holds a different stance. According to him, "the Israelis are in a win-win situation because they can continue to sow instability and instigate violence both in Iran and in Syria".

"Trumps' move, although may be good for the Syrians, will definitely embolden both Israel and Turkey, each for opposing reasons," he suggested. "It will free Turkey's hands to deal with the Kurdish problem, and will give the Israelis, British and the French the justification to continue the pursuit of a belligerent policy toward Syria using the Syrian Kurds as a ruse".

The views and opinions expressed by the contributor and the speakers do not necessarily reflect those of Sputnik.