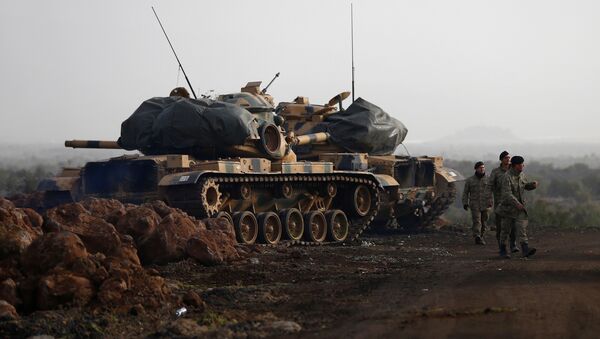 The news comes as President Recep Tayyip Erdogan's spokesman revealed that American military officials are set to meet with their Turkish counterparts to discuss coordination on Syria following Washington's decision to withdraw troops from the Arab Republic.

Turkish Foreign Minister Mevlut Cavusoglu has commented on Paris’ plans to remain in Syria amid the withdrawal of US troops, saying that "there will be no benefit to anyone”, according to the Anadolu news agency.

The development comes on the heels of reports of the Turkish president inviting Donald Trump to Ankara, as well as reports stating that military officials of both states are set to hold a meeting to better coordinate their actions in Syria.

US Pulling Troops Out of Syria Due to Failed MidEast Policy - Syrian Ambassador
Donald Trump recently declared the US will be pulling out its nearly 2,000-strong military force from Syria as the Daesh* terrorist group had been crushed in the country. The decision was met with criticism from Washington's European allies, including Germany and France.

Subsequent media speculation suggested that Trump made the move only after being reassured by Erdogan that Turkey would eliminate terrorist remnants in Syria.

READ MORE: Possible Purchase of US Patriots Not Alternative to S-400 — Erdogan's Spokesman

In December, Erdogan announced that Turkish forces were prepared to kick off an offensive on the east bank of the Euphrates River against Kurdish formations as soon as possible. Later, Foreign Minister Cavusoglu said that the operation in northern Syria would be postponed until the Americans withdraw from the region completely. At the same time, Erdogan's spokesman said that Ankara is going to coordinate its anti-Daesh campaign with Moscow.

*Daesh (also known as the Islamic state/ISIS/ISIL) is a terrorist group banned in Russia.