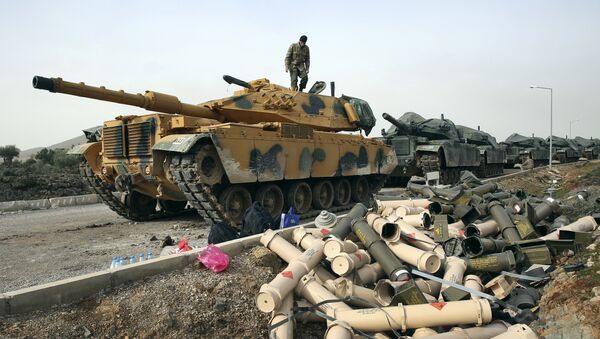 Turkish Presidential Spokesman Ibrahim Kalin has announced that Ankara intends to continue its fight against terrorism without seeking consent from other countries, Hurriyet Daily News reported on Tuesday.

"It is out of the question for Turkey to get permission or consent from Israel or any other country [to fight terror]," he told journalists after a cabinet meeting.

Earlier, Israeli Prime Minister Benjamin Netanyahu slammed Erdogan on Twitter, calling him "the occupier of northern Cyprus, whose army massacres women and children in Kurdish villages, inside and outside Turkey", and insisted that the Turkish president "should not preach to Israel".

Erdogan – the occupier of northern Cyprus, whose army massacres women and children in Kurdish villages, inside and outside Turkey – should not preach to Israel.

​In response, Erdogan dubbed Netanyahu is "the voice of tyrants" and the head of "state terror".

Meanwhile, Kalin also claimed that US President Donald Trump decided to withdraw American troops from Syria after Erdogan told him “loud and clear” that Washington and Ankara don’t need the help of Kurdish YPG/SDF forces to fight Daesh*.

"There is no step back, weakness, halt, or slowdown in the fight against Daesh terror group," Kalin said after declaring that Turkey will maintain its military presence in the Syrian province of Idlib in order to ensure "security and stability in the region".

Ex-NATO Official Suspects Erdogan Blackmailed Trump Over US Exit From Syria
Erdogan and Netanyahu have previously engaged in verbal clashes with each other on numerous occasions.

The row between the Turkish and Israeli leaders flared following the recent escalation of tensions on the Israel-Gaza border, which claimed the lives of four Palestinians on Friday.

In December, Erdogan announced that Turkish forces were prepared to kick off an offensive on the east bank of the Euphrates River against Kurdish formations as soon as possible.

Later, Foreign Minister Cavusoglu said that the operation in northern Syria would be postponed until the US troops completely withdraw from the area. At the same time, Erdogan's spokesman said that Ankara is going to coordinate its anti-Daesh campaign with Moscow.

000000
Popular comments
Sometimes, but just sometimes, I wonder how dumb folks are... Not that long ago, 2 years or so..?, there been clear evidence and facts Erdogan AKP are one of the main supplier of Daesh and other mercenaries in Syria and Iraq. Not just that, there been phone calls all over the net proofed, Erdogan and his crime-organization called "AKP" are in BIG business with Daesh... As I wrote.. sometimes, but just sometimes....