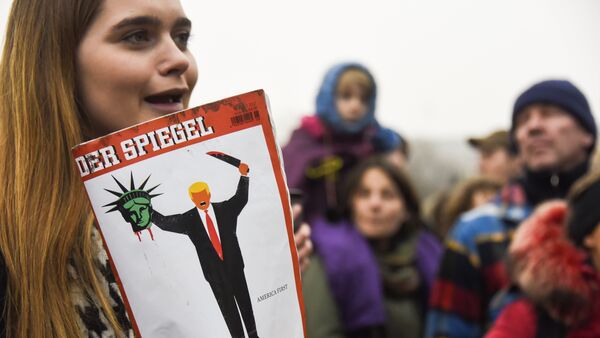 © AFP 2023 / ODD ANDERSEN
Subscribe
International
India
Africa
Der Spiegel is set to file a criminal complaint against Claas Relotius, a former journalist of the newspaper, who admitted to falsifying reports and disseminating fake news. Alan Bailey, a UK-based political commentator, spoke to Sputnik about the reputational damage the case has caused for one of Germany's leading media outlets.

Sputnik: In your view, why was one of the biggest German media outlets not checking what its journalists were putting out?

Alan Bailey: It’s a combination of two aspects. Are the articles the journalist produces popular? Do they attract readers? If they do (as appears to be the case with Relotius) then why mess with a successful formula? And secondly, are the journalist's articles backing up the narrative the publication wishes to push? Again, yes, in this case. Anything outside the Liberal ‘soft-left’ viewpoint is called out as extremist and dismissed as niche and dangerous. Claas Relotius was a textbook case of both these and was over time given a free hand to write and say whatever he wished. He realised over time that this was the case and pushed his luck further and further until his luck ran out.

Sputnik: The allegations made against the journalist have already tarnished Der Spiegel’s reputation. In your view, what can be done by the newspaper to redeem its image?

German Media Explains Why Merkel's Visit to Lithuania May Face Local Scrutiny
Alan Bailey: Well, it will be a slow and painful process. The first part they have already started. They came clean about what was going on and did not try to defend Relotius in any way.. They actually ‘hung him out to dry’ to use the informal term. Then they must openly and transparently examine how they work and document this process for all their readership to see. It should be a long process, but, unfortunately people's attention spans are so short these days, I have a feeling within 6 months all will be back as it was before. As for Minus Relotius, I cannot imagine he will work as a journalist ever again.

Sputnik: There were already reports about growing distrust in the media with some German politicians claiming that mainstream journalism does represent the world as they see it. Does this case further worsen the situation?

Alan Bailey: For a start, it reinforces the view that mainstream media is a manipulator of opinion, not a provider of untarnished information. In the West, the vast, vast majority of publications only represent a narrow focus of political opinion. Some maybe to the right of centre, others to the left, but it is all a very homogenised centrist view of the world. The journalists they hire subscribe to this worldview and the owners of the publications have an interest in pushing this same worldview to their readership. The problem they have is that now our sources of information are not limited to a newspaper and TV news program, and the more the public gain access to alternative news sources, the more the mainstream media lose their grip on opinion.

Instead of attempting to address this, they have instead ‘doubled down’ on their message and attempted to exclude anything beyond this, at first by ignoring and devaluing it, and lately by attacking and claiming anyone with views not matching theirs is a dangerous extremist. The Relotius case will only hasten the decay in mainstream media trust and viewership.

'Is Merkel to Blame for Brexit?' Asks Germany's Spiegel
Sputnik: This is not the first time a Western media outlet has been accused of publishing stories without fact-checking them. Why is that?

Alan Bailey: What does this say about the journalism in the West in general? Kind of going back to what I said earlier. Journalism in the West has attempted to contain its readership within a narrow cone of roughly centrist thought. Backing up the views of TV news channels. It has ceased to challenge the status quo. It is incapable of looking at the other side of the discussion anymore… long before it's got to this, it is shouting down other opinions and disregarding them. In essence, the Cart is in front of the horse; the message is more important than the journalistic process.