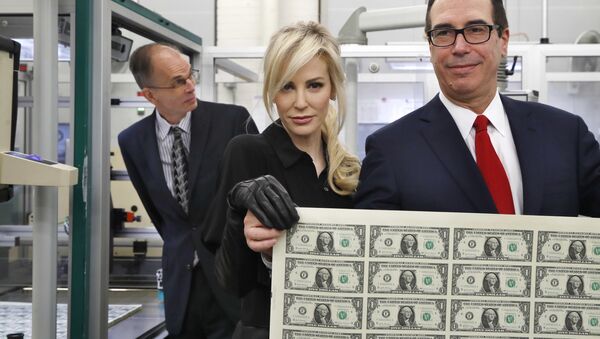 © AP Photo / Jacquelyn Martin
Subscribe
International
India
Africa
Ivan Danilov
All materials
It looks like the Trump administration is in full panic mode. Steven Mnuchin is trying to calm the markets, but his efforts are actually making things worse.

The reason for the calls was to calm down the top players of the American financial sector amid an ongoing rout on Wall Street. Judging by the reactions seen on social networks, the plan backfired spectacularly.

"The Secretary of Treasury calling the nation’s top bankers on a Sunday to confirm they have cash to lend. Not exactly confidence inspiring," wrote Ian Bremer, the President of the influential think-tank Eurasia Group.

The Secretary of Treasury calling the nation’s top bankers on a Sunday to confirm they have cash to lend. Not exactly confidence inspiring. https://t.co/Ttp8IarFvQ

"Just in case any major bank CEOs were not worried about the prospects of another financial crisis, Mnuchin's Sunday afternoon calls to assure everyone there is nothing to worry about may have the opposite effect.  Instead of putting out a fire he may have just lit one," said Peter Schiff, a hedge fund manager and a vocal critic of the Trump administration.

Just in case any major bank CEOs were not worried about the prospects of another financial crisis, Mnuchin's Sunday afternoon calls to assure everyone there is nothing to worry about may have the opposite effect. Instead of putting out a fire he may have just lit one!

Nouriel Roubini had his own theory on Twitter: "The fact that Mnuchin issued such a statement via Twitter… is a signal that he was terrified that reports that Trump may consider firing [Federal Reserve President Jerome] Powell could crash the markets".

Some commentators drew a parallel between Mnuchin’s calls and the calls made by then-Treasury Secretary Hank Paulson right before the collapse of Lehman Brothers in 2008. Others  lambasted the Treasury Secretary for inducing panic: “it's like standing up in a crowded theater and yelling "everyone remain calm, the fire department is on the way," an anonymous trader wrote on Twitter.

Donald Trump has a serious problem on his hands and no easy solutions are available. He thinks (and rightly so!) that the Federal Reserve is ruining the economy and that its policies of raising interest rates is the reason why the stock market is falling. However, he can’t just fire Jerome Powell and appoint a new President of the Federal Reserve because it is unclear whether the US President has this legal power (the experts are divided on the issue) and because such a radical move would likely destabilize the markets and make matters worse.

On the other hand, letting Powell raise rates even further will ruin the President’s approval rating and the economy, because a stock market crash is obviously bad for ratings and for the economy. On top of that, Trump believes that he’s on the verge of winning the trade war with China and the Fed’s actions are depriving him of a well-deserved victory by weakening the US economy during the decisive phase of the Sino-American conflict. Basically, his only hope is that the big banks and the big hedge funds can pressure the Federal Reserve and force Powell to stop raising rates or even make him adopt a more accommodating policy stance. Maybe, that was the real reason for the calls made by Steven Mnuchin. Maybe, that is the real reason why Mnuchin decided to convene a group of officials known as the “Plunge Protection Team”, which includes officials from the Federal Reserve as well as the Securities and Exchange Commission.

It remains to be seen whether the Federal Reserve will stand up to Trump and his situational allies from Wall Street or cave under pressure. Maybe, Powell will be willing to stop raising rates only after a 20% or 30% down move of the S&P 500 or Dow Jones Industrial Average.

There is no way a massive economic crisis can be averted. It can only be delayed and that is what Trump is fighting for. He knows that the US economy is (in his own words) a “fake economy” but he obviously is unwilling to shoulder the blame for a market crash. Trump’s predicament fits the description of a systemic crisis made unavoidable by the insane monetary policies of the previous administrations and presidents who systemically chose to kick the can down the road and used an exceptionally lax monetary policy in order to create the illusion of an everlasting economic boom.

In 1949, the legendary economist Ludwig von Mises wrote: “There is no means of avoiding the final collapse of a boom brought about by credit expansion. The alternative is only whether the crisis should come sooner as the result of voluntary abandonment of further credit expansion, or later as a final and total catastrophe of the currency system involved.”

Florida Holiday Canceled, Trump to Remain in DC Amid Govt Shutdown - White House
If Jerome Powell gets his way, the crisis will come sooner and it will be caused by the “abandonment of further credit expansion” and a radical contraction of the Federal Reserve balance sheet. If Trump gets his way, the crisis will come later, but it will likely be a crisis of bigger proportions and it will involve a “catastrophe of the currency system involved”. There are no good solutions, but the US President can still hope to pin the blame on somebody else, most likely on the Federal Reserve that seems hell-bent on causing a crisis right now.

It is unlikely that the public will buy his explanation, but at the end of the day if Trump’s allies on Wall Street are unable to make Jerome Powell change his mind, Trump will have no other options left. However, given that the banks contacted by Steven Mnuchin literally own the Federal Reserve there is a chance that the crisis will be averted, at least for a couple of months or, if Trump gets lucky, for a couple of years. However, in the long run, Fed’s decisions change nothing because the “fake economy” has to implode sooner or later.

The views and opinions expressed by Ivan Danilov are those of the contributor and do not necessarily reflect Sputnik's position.