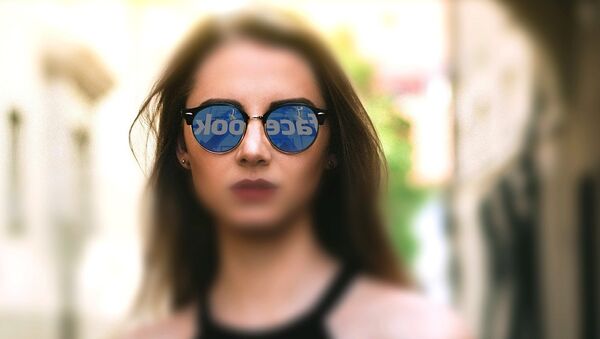 MOSCOW (Sputnik), Tommy Yang - Feeling heartbroken following a bitter break up, Laura Montes, a freelance performing artist from New York City, has always struggled to resist the temptation of clicking on the pictures of her ex-boyfriend whenever such images popped up on her Facebook timeline.

"I’ve had a couple of bad relationships over the last couple of years. While I was trying to figure out how did it happen and what was going on, I saw my exes [appearing on my Facebook timeline] and couldn’t resist finding out whose stuff they liked at the time or who they were seeing around. But this is not helping. It makes me feel more anxious and feel worse about myself. It’s like stabbing myself in the heart," Montes told Sputnik.

As a result, Montes has tried to delete her Facebook account many times during the past ten years, after first joining the social media website in 2008. Unfortunately, each time, she felt the need to sign up a Facebook account again after a few months because of the convenience of the platform, especially when it comes to job hunting or finding an apartment.

‘We Are the Product’: Facebook Sold Your Data Then Lied to You About It
Despite its growing popularity and increasing dominance globally, Facebook has faced a number of serious setbacks in recent years, including the accusation of failing to control Russia’s alleged exploitation of its platform during the 2016 US presidential election, as well as handing private user data to third party companies such as the Cambridge Analytica for improper political usage.

Last week, Facebook admitted that it shared private user data, including people’s private messages, with partner companies, including Amazon, Apple, Microsoft, Netflix, Spotify and Yandex, while arguing that sharing such information with partners could help offer users a better experience.

For users like Montes, whose personal lives could be seriously affected by Facebook, the US social media giant’s disappointing record in managing user data properly has led to their decision to join a movement of deleting their Facebook accounts under the hashtag of #deletefacebook on Twitter.

Impossible to Stay Away

Montes illustrated how much she struggled personally with Facebook’s algorithm of recommending content related to her ex-boyfriend to her timeline.

"I felt almost like a drug addict. ‘Oh, look there’s information on this person. Let me click on it. Let me see what else is related to that.’ It’s almost like an addiction to drugs. It felt crazy," she said.

However, she explained how difficult it is for her to stay away from Facebook despite her personal struggles with the platform.

"In the last couple of years, I’ve deleted the Facebook app from my phone and deleted my account. But I’ve always gone back to it, either for finding jobs, because I’m a freelance performing artist. For example, I got offered two jobs to teach at universities through Facebook messenger. I guess I have to be on there [Facebook] for jobs. I also have to be there to find places to live, such as housing groups," she said.

Montes decided to delete her Facebook account again in June, although she’s not sure how long she can stay away from the social media platform.

"I’m doing this show right now. The producers and other cast members would ask: we saw this review of our show and can you repost it? I would say: well, I can’t, because I don’t have Facebook. It’s kind of an unspoken thing that people just assume you’re on Facebook," she said.

To help frustrated users figure out a way to deactivate their Facebook accounts, Edward Cant, a web designer based in the United Kingdom, created a website named deletefacebook.com with detailed instructions on how to permanently delete a Facebook account.

"It was about eight years ago in 2010. Facebook was getting very popular. I was probably a little bit more privacy conscious than most, as I did computer science in university and had a little bit more awareness. I saw an opportunity at the time because Facebook was not publicizing how to delete an account even if you wanted to. It was buried deep into the menu options. The only way to find the page was to have the link. So I thought I had the opportunity to help people find it," Cant told Sputnik.

The UK-based web designer believes it will be difficult for Facebook to regain trust from privacy conscious users, because of the social media giant’s business model relies on collecting user data.

"It’s not just the last year they [Facebook] had privacy scandals. In the last eight years, I’ve had a list of privacy focused articles about Facebook from way back in 2010. They had eight years to do it. But their difficulty is that their entire business model is based on making money from ads, which means the more data they have the better," he said.

With more and more users becoming aware of the sacrifices they make in terms of privacy to enjoy the convenience Facebook provides, they could start to change their preferences and behavior, Cant noted.

"Ten years ago, you’d get advice from your parents: don’t give out your real name on the internet, don’t give out your phone number and don’t meet strangers. All this kind of old-fashioned advices changed incredibly quickly. I think it can change back. People see it all the time in the news, but they just blank it out and they still have a tolerance for it [Facebook], because it’s so convenient. When that tolerance tilts a bit more toward people being more concerned about their privacy, people may start making a choice," he said.

Facebook Bans Netanyahu’s Son for a Day Over Anti-Muslim Posts
Following the revelations of former US National Security Agency employee Edward Snowden on the expansive digital surveillance efforts by US and other Western governments, privacy conscious users started to prefer services that offer excellent encryption such as the Signal messenger service, which is recommended by Snowden himself.

Cant pointed out that for new services to replace Facebook or challenge its dominance, such services have to be viewed as "cooler" among the users.

According to personal experiences of Montes, the freelance performing artist, the taste of the younger generation has already started to shift.

"Maybe Facebook would just die, like how Myspace died ten years ago. What gives me hope is that people who I meet and who don’t make Facebook a big deal are the younger people. The younger the people are, the less they’re on Facebook. It’s like their parents wouldn’t let them [use Facebook when they were younger]. Then they got old enough, they got Instagram and Snapchat and they don’t need it [Facebook]. I think the younger people would carry this wave of we don’t take Facebook seriously and could force Facebook to change," she said.

Cant, who runs deletefacebook.com, noted that Facebook bought popular services such as Instagram and Whatsapp to diversify their offerings and hedge against the risks of losing its appeal among younger users.