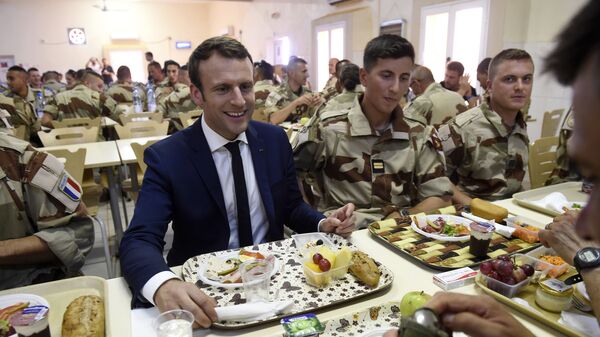 PARIS (Sputnik) - France will retain its military presence in the Levant region, French President Emmanuel Macron said on Sunday, while commenting on the US decision to withdraw troops from Syria.

"France will remain engaged in the Levant region. Today, there is [France’s] military presence there," Macron said at the joint press conference with his Chadian counterpart Idriss Deby.

'Slow, Highly Coordinated': Trump Says Had Call With Erdogan on Syria Withdrawal
The president also recalled that, from the very beginning, the US-led international coalition had been operating in Syria with the support of the Syrian Democratic Forces (SDF) and the Kurdish forces in general.

"Therefore, I call on everyone to be responsible and not to forget that we owe them," he added.

Macron noted that Operation Barkhane in Africa's Sahel region would continue. "In no case, will the choice of one or another power have an impact on our involvement. It will continue," he stressed.

In January 2013-July 2014, France carried out several military operations in Mali aimed at ousting jihadists from the country's north. In August 2014, they were replaced by the Barkhane operation, designed by France and the so-called G5 Sahel, comprising Burkina Faso, Chad, Mali, Mauritania and Niger.

On Wednesday, the White House announced that the United States began the pullout of its forces from Syria, but stressed that it did not mean the end of the US-led international coalition's fight against the Daesh terror group. Earlier on Sunday, Macron expressed deep regret over the US decision.