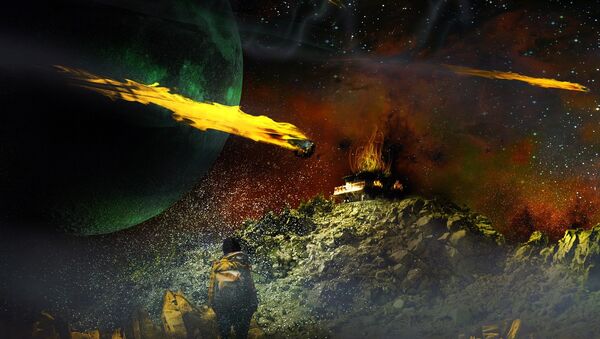 The predictions do not seem to be far-fetched in light of recent assessments of the seismic activity in the mammoth Ring of Fire zone offered by the relevant UN agency.

A number of Rabbis took note of the Ring of Fire’s spate of recent volcanic eruptions and earthquakes and warned that these could notably be a sign of Apocalypse as it is foreseen in Hebrew texts.

The Ring of Fire, an area of high seismic activity that covers large swathes of land from New Zealand all the way to northern Russia, as well as from the US down to Chile, is no new to deadly natural phenomena, with the latest one, a tsunami, severely hitting Indonesia just recently.

The disaster, linked to the eruption of the Krakatoa volcano, led to as many as 222 deaths. Interestingly, all but three of the world’s 25 most massive volcanic eruptions occurred along the perimeter of the Ring of Fire, and even more disasters may be coming along, as according to a tweet by the UN Office for Disaster Risk Reduction, the troubled area is “active.” To prove the point, the agency brought up the recent massive earthquake that had shattered Alaska and led to an across-the-board tsunami warning.

One rabbi, Yosef Berger, referred to the incident earlier this week as “part of the Messiah:”

"This is a global phenomenon, clear for everyone to see, but the important message is for each individual to understand what is happening as part of the Messiah,” he was cited by Breaking Israel News as saying. He went on to note that people who “do not see God in the world” mistake deadly disasters for the laws of nature “they have made up that they rule over God’s creation.”

Rabbi Nir Ben Artzi likewise expressed a belief that the Messiah, who was earlier this year claimed to have been born, put the humanity on the threshold of “redemption” and is waiting just to reveal himself to the world.

“The Creator is purifying the world from the filth of the snake in order to prepare the way for the Messiah to be revealed in the world,” he said in one of his weekly sermons:

“The Redemption will come mercifully so our Father in Heaven uses nature against us: through storms, fires, earthquakes, and volcanos,” he pointed out.

Artzi explained that as “the holy one is destroying all the evil in the world” it at the same paves the way for “the light of the Messiah,” with the world is thereby going simultaneously through destruction and rebirth.

In Judaism, the end of days corresponds to the arrival of the Jewish Messiah, who will rule during his Messianic age before ushering in the kingdom of God’s era.