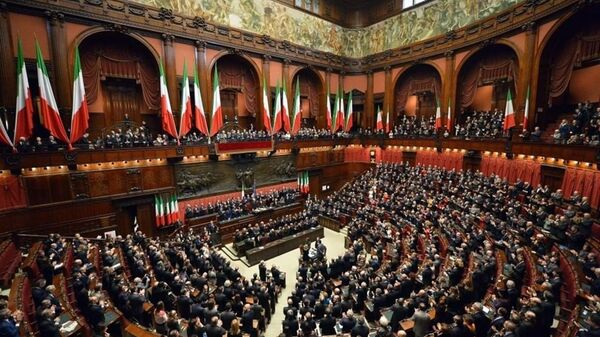 On December 19 the long lasting controversy over Italy's budget for the 2019 fiscal year was settled during talks between Rome and Brussels, which paved the way for a national-level approval procedure.

The upper house of the Italian parliament approved Rome's proposed 2019 budget plan on Sunday. The government's budget plan received 167 votes for its implementation, 78 votes against with 3 abstentions.

Now the budget has to be approved by the lower house of Italian parliament, which could happen as early as 27-28 December as planned by Deputy Prime Minister Luigi Di Maio.

Expert on Italy, EU Budget: If They Possibly Can Reach Agreement, They Will
A cut-off date for an approval of the budget is set to take place on 31 December.

Earlier, Brussels and Rome concluded a deal on Italy's 2019 draft budget, initially rejected by the EU authorities over concerns about the country's debt.

It was agreed that Italy will narrow its 2019 deficit forecast to 2.04 percent of GDP instead of the initial 2.40 percent and lower its economic growth outlook to 1.0 percent from 1.5 percent, according to Reuters.

Italy's previous budget plan was rejected by Brussels in October and November after being described by European Commission Vice-President Valdis Dombrovskis as "serious non-compliance".

According to EU rules if its member countries fail to comply with Brussels requirements in the context of a special procedure called Excessive Debt Procedure (EDP) it may be fined 0.2 percent of its GDP or have EU assistance temporary suspended.