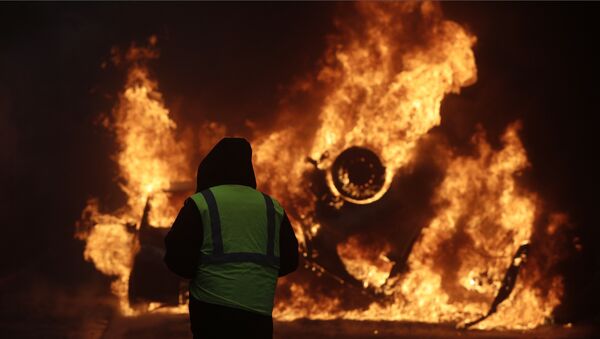 Despite the French government walking back over its plans on the fuel tax hike, as well as the parliament's backing of the proposed economic and social measures announced in response to the Yellow Vests' demands, the protests have been ongoing for the 6th weekend in a row.

While last week the number of participants in the Yellow Vests' rallies across France had reportedly declined, the protests, however, have continued on 22 December.

The wave of the so-called yellow vest protests — named after the obligatory attribute of French drivers — started in mid-November.

While the French government has scrapped its planned hike in diesel taxes, which is what initially sparked the protests, the yellow vests have evolved into a broader movement against government policies and rising living costs.

The rallies have been marked by violent clashes between protesters and the police, rioting, burning cars and destroyed shops and banks.