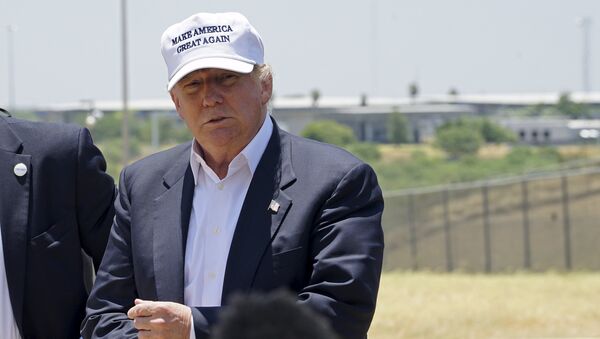 WASHINGTON/MOSCOW (Sputnik) - The US Senate adjourned without voting on a spending bill to avert a partial government shutdown but plan to reconvene on Saturday.

The failure to resolve differences over President Donald Trump’s demand for funding for a border wall guarantees the government will partially shut down when funding for key operations expires at 11:59:59 p.m. on Friday (around 5:00 a.m. GMT on Saturday).

US President Donald Trump said in a video published on his Twitter account on Friday that a partial shutdown of the government would hopefully "not last long". In his speech, the president also emphasized the need for border security for the United States, saying he did not want criminal gangs, human trafficking and drugs pouring through the border into the country.

"With a wall, or a slat fence, or whatever you want to call it, but we need a great barrier. And if we don't have it, it's never going to work," Trump explained.

OUR GREAT COUNTRY MUST HAVE BORDER SECURITY! pic.twitter.com/ZGcYygMf3a

The Senate had voted earlier 48-47 to proceed with the vote on the spending bill that would include $5.7 billion for border wall funding. However, Senate Democrats said they would not provide the 60 votes needed to approve it.

'Artistically Designed Steel Slats': Trump Says Border Wall Will Be 'Beautiful'
Senate Majority Leader Mitch McConnell took the floor after the vote to express hope Democrats will work with the White House on a proposal that can pass both chambers and receive the signature of President Donald Trump.

"When the agreement is reached, it will receive the vote here on the Senate floor," McConnell said.

Senate Minority Leader Chuck Schumer reminded that the wall funding does not have enough supporters in the upper house. However, Democrats have their proposals to keep the government open and are willing to continue discussions with the Trump administration to agree on the best version of the bill.

Senator Bob Corker commented on the vote by saying that Republicans and Democrats will hold negotiations to avoid the shutdown. He did not rule out a possibility of a brief shutdown.

US House Lawmakers Leave Capitol, Guaranteeing Partial Government Shutdown
Late on Wednesday, the Senate approved a spending bill, ensuring the government funding through February 8, in a bid to avoid the partial government shutdown, which might happen at midnight on Friday if the budget is not approved on all the levels. However, the measure approved by the Senate did not include funding for the wall construction.

Trump, who has been an advocate of the anti-migration policies, has hinted that he would risk a government shutdown for the sake of the construction of the wall on the Mexican border.

Building a wall on the US-Mexico border was one of Trump's key promises throughout his presidential campaign. The president believes that the barrier will stop undocumented migration, as well as human and drugs trafficking.