Give RBG a Piece of Me! Twitter in Tizzy After News of US Justice's Surgery 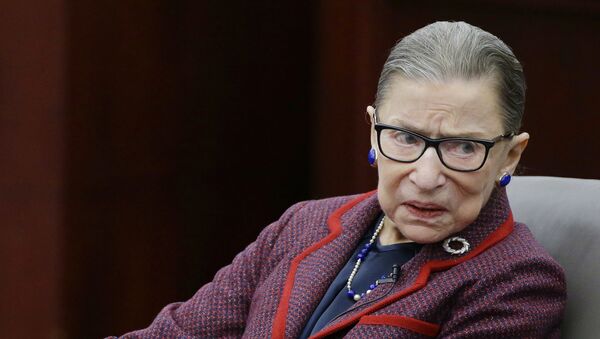 According to a news release from the court, the nodules were detected by physicians during tests performed last month at George Washington University Hospital. Officials at the time were treating Ginsburg for rib fractures she'd sustained during a fall in her office.

Attending physicians found no evidence of any remaining growths in the lung or elsewhere in her body post surgery.

"Currently, no further treatment is planned," the statement reads. "Justice Ginsburg is resting comfortably and is expected to remain in the hospital for a few days. Updates will be provided as they become available."

Despite the official word that RBG is well on the road to recovery, netizens still rushed to offer the aging justice thoughts, prayers and… lungs.

​Some even suggested her health scare was part of a Trump-inspired political attack, while others, like Bill O' Reilly, initiated talk of a new seat opening up on the bench.

Ginsburg's lung cancer scare is just the latest in a long list of health setbacks she's endured over the years. The New York City-born justice previously was diagnosed with colon cancer and pancreatic cancer in 1999 and 2009, respectively, and in 2014 received a stent in a heart procedure.

​However, her health issues have never kept her from fulfilling her duties on the Supreme Court. According to USA Today, after her November fall, Ginsburg, still hospital-bound, continued with her judicial work.