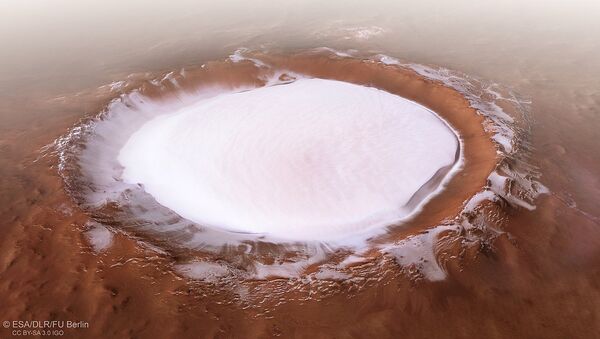 The European Space Agency suggested their view of a perfect holiday destination when they shared pictures of the snow-capped 82-kilometre-wide Korolev crater, covered with ice throughout the year due to a phenomenon known as a “cold trap”. The tip has a minor drawback - it is over 400 million kilometres away from the Earth.

The ESA has revealed a breathtaking image of the Korolev crater in the northern lowlands of the Red Planet, taken by High Resolution Stereo Camera (HRSC) of the Mars Express mission. The image of the terrain in and around the landscape is a combination of five different “strips”, gathered over orbits. It is also shown in perspective, context, and topographic views.

A beautiful #winter wonderland… on #Mars! This ice-filled crater was imaged by our Mars Express spacecraft. Korolev crater is 82 kilometres across and found in the northern lowlands of Mars.
More images: https://t.co/48Czjh80Qb pic.twitter.com/5KDQ1PJ0jt

​The picture was revealed ahead of the upcoming 15-year anniversary of this European science programme on Mars, as the satellite fired its main engine and entered the planet’s orbit on Christmas Day in 2003.

The agency states that the Korolev crater, named after the founding father of the Russian space industry, who developed Sputnik and sent the first man into orbit, is especially well-preserved and has a distinguishing feature. It looks like a giant skating rink throughout the year as it is covered with a 1.8-kilometre-thick water ice cap.

The phenomenon that has turned the crater into an all-year-round “winter wonderland,” as the ESA put it on its website, is called “cold trap”. Korolev’s base is 2 kilometres below the rims, so its deepest parts are like giant refrigerators. They create a shield layer of cold air, which prevents the ice below it from melting.

Netizens, under the spell of Christmas, glanced at the phenomenal crater from this point of view.

Ice skating with 1/3rd earth gravity under a pink sky… I hope it happens before we die:)

Some rushed to call dibs on the “Martian pool”.

I will sue everyone that swims here. Find another pool @NASA.

​Others suggested humanity should pick Mars to host the Olympic Games.

Well, if Qatar can get World Cup 2022 anything is possible pic.twitter.com/p3B2oZU35b

​Others just shared their delight about a scientific breakthrough that we can all enjoy.

Unreal! That's out of this world!

It's so Amazing. Our ancestors would've never imagined a time were humanity would catch a glimpse of other worlds.