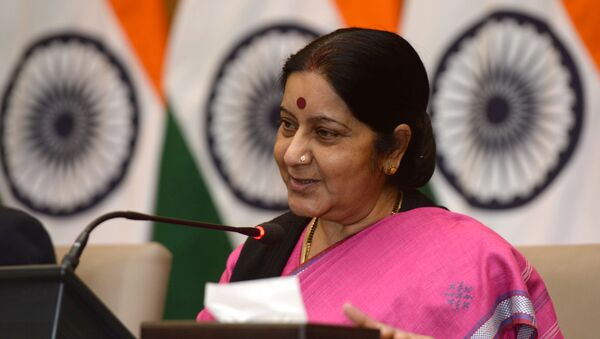 © AFP 2021 / PRAKASH SINGH
Subscribe
The new mechanism, which evolved during the Wuhan summit earlier this year between the leaders of the two countries, aims to build synergies in people-to-people ties.

Putting people to people ties at the centre

Chinese Foreign Minister Wang Yi arrived in New Delhi on Friday in for a four-day visit. Sushma Swaraj and Wang Yi also discussed bilateral cooperation between India and China and the prospects of enhanced military cooperation.

Bridging the gap through media cooperation

Chinese State Councilor and Foreign Minister Wang Yi at 3rd India- China High Level Media Forum Inaugural Session in Delhi: People to people exchanges must increase between India and China. It will serve as progress for the entire mankind. pic.twitter.com/TPHF9dCUb6

​​Speaking at the forum, the Chinese foreign minister said, "People-to-people exchanges must increase between India and China. It will serve as progress for the entire mankind".

After the Wuhan informal summit in China this year, both India and China began taking measures to reset ties, which dipped to a new low after the Doklam standoff last year.

Earlier on Thursday, as part of a goodwill gesture, India relaxed visa norms for Chinese nationals by extending an e-visa facility to those that visit India to attend conferences or those who visit as medical attendants.