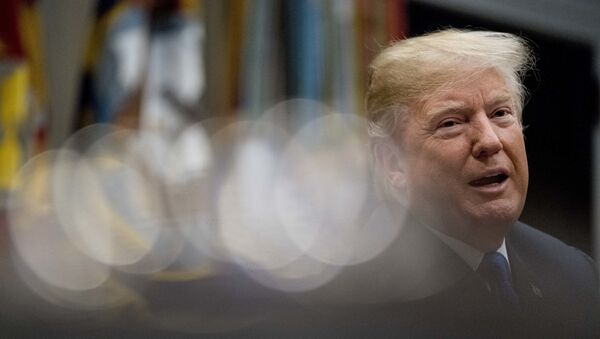 We may have seen several different sides of the US president – from entrepreneur and eccentric billionaire, to passionate speaker and showman. He recently revealed yet another one of his personas – “farmer Trump” - as he announced the signing of the massive agricultural bill with a little throwback music video.

The US president tweeted a clip, dating back to the 2005 Emmy Awards, of himself dressed like a stereotypical farmer and singing "Green Acres" with "Will & Grace" actress Megan Mullally, to mark the signing the farm bill, which allocates subsidies to people in the agricultural industry.

​The throwback triggered a storm on Twitter. His singing partner in the video resorted to beating herself up for having taken part in the performance.

​Many echoed her revulsion.

Days without being embarrassed by the "president" = 0

I've said it before. I'll say it again: The PRESIDENT OF THE UNITED STATES, folks 😖😬 pic.twitter.com/tzjRZNCcOw

Oh dude, you are SO desperately trying to distract from everything burning down around you. It's amazing.

​Some even called on the men in black for help.

Where’s Agent J when you need him pic.twitter.com/nYj15LW3sQ

​Others were not quite so harsh on the president and patted him on the back for having a good sense of humour.

Hahaha…freaking awesome. @realDonaldTrump is the greatest president ever. Can't wait to see the video for when we get funding to build the wall.

How can you not love this guy? Amazing sense of humor. #MAGA

Thank you 420 times over for signing the #FARMbill, President Trump 🤗

You’re the FIRST @POTUS with a SET of BALLS to legalize #HEMP production.

this will #MAGA 🇺🇸 pic.twitter.com/g18eGGYnNl

​It didn’t end with only posting the clip on social media. The recording of Trump singing the song was played right before he showed up for the signing ceremony.

"We're here to celebrate a really tremendous victory for the American farmer. Ranchers, agriculture, incredible people", Trump said to all those present.

The 5-year bipartisan farm bill, passed after months of negotiations, sets regulations for areas from farming, energy and forestry, to nutrition, conservation, and trade. It merged different versions passed earlier this year.