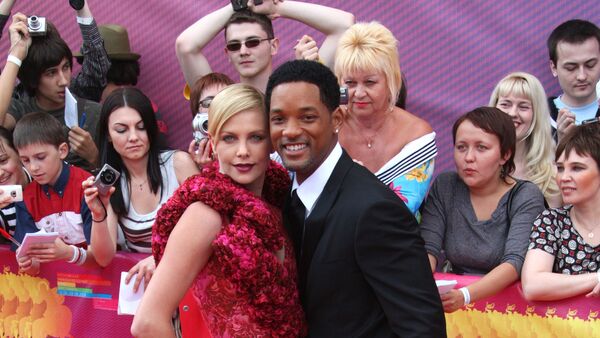 With all the controversial casting decisions of recent times, one can never be sure.

Actor Will Smith had to reassure his fans that his version of Genie in the upcoming "Aladdin" movie will actually be blue — just like in the classic 1992 Disney cartoon — after some confusion over the initial look of the character.

"BAM!! First look at the Genie, Princess Jasmine, and #Aladdin! Check Me Rockin' the Top Knot Ponytail Vibes in @entertainmentweekly (and yes, I'm gonna be BLUE! :-))," the star wrote on his Instagram.

BAM!! First look at the Genie 🧞‍♂️, Princess Jasmine, and #Aladdin! Check Me Rockin’ the Top Knot Ponytail Vibes in @entertainmentweekly 😆 (and yes, I’m gonna be BLUE! :-) This is how the Genie is in Human / Disguise Form. My character will be CGI most of the movie.)

In the movie business, casting black actors to play white characters is not a new concept. In the classic "Men in Black" movies, Smith himself played the role of the originally white Agent J. His character Robert Neville in "I Am Legend" was also white in the source material. Some of these castings were received well by audiences.

Viral
Disney Announces Star Wars Prequel Series For Its Upcoming Streaming Service
However, other casting decisions have caused quite a stir among fans. For example, some "Harry Potter" fans who grew up with Emma Watson playing Hermione Granger have not welcomed black actress Noma Dumezweni in the role. Rumors that Netflix would cast a black actress for the role of Ciri, a major character its "Witcher" series, also caused quite a stir.

As we can see, the first (or most iconic) version of a character gets imprinted in the mind of the audience quite firmly. While the cartoon Genie was voiced by the late Robin Williams, he was most definitely remarkably blue. The poster featuring Smith as Genie shows him in "Human/Disguise Form," the actor explained. Apparently, at some point in the story, the Genie will have to conceal his magical nature.

For the rest of the movie, his character will mostly be a blue-hued CGI animation, Smith said on Instagram.

"Aladdin," which is set to premiere in 2019, also casts Mena Massoud as Aladdin, Naomi Scott as Jasmine and Marwan Kenzari as Jafar. Billy Magnussen and Nasim Pedrad are also in the cast.

Then They Came for Disney: Feminists Set Their Sights on Classic Animated Films
The movie will be directed by no other than Guy Ritchie, the creator of "Lock, Stock and Two Smoking Barrels," "Snatched," "Revolver" and the two most recent movie interpretations of the world's most famous detective, Sherlock Holmes.

Disney, which has embarked on a long-term plan of remaking its most iconic cartoons as live-action films, has already released "Cinderella," "The Jungle Book" and "Beauty and the Beast." Upcoming movies also include "Dumbo" and "The Lion King," with the latter appearing to be a direct, shot-to-shot remake, much like Gus Van Sant's remake of Alfred Hitchcock's "Psycho" — a rare occurrence, despite the ongoing trend on series reboots.