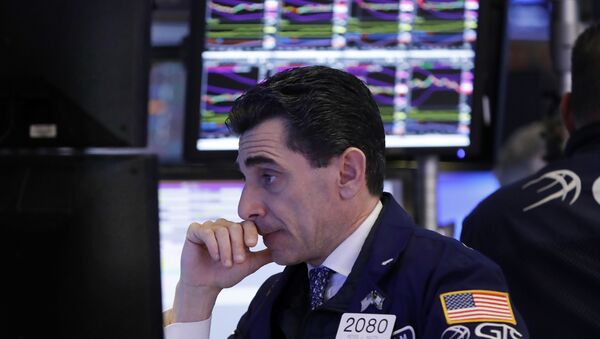 The Dow slipped as far as 679 points during Thursday's trading session. The Nasdaq, a market index tracking tech stocks, sank 1.6 percent on the day and officially entered bear market territory. The S&P 500 was also down about 1.6 percent.

The Dow is now down 10 percent in December alone, putting it on pace for its worst month in almost a decade.

The Federal Reserve, for its part, was not fazed by recent market movements this week. On Wednesday, the Fed announced it would be lifting the federal funds rate — which is a lever of sorts for manipulating interest rates across the American market — a quarter of a point from 2.25 percent to 2.50 percent. The Dow dropped to fresh 2018 lows following the Fed's decision, Sputnik reported.

Meanwhile, crypto markets have rallied a bit, with Bitcoin jumping back up to $4,000, a 6.24 percent uptick in the last 24 hours, according to CoinMarketCap.

Trump has vowed to lawmakers that he won't sign into law a new budget unless Congress provisions funds for the border wall, even though questions loom about how well the government spent the $1.8 billion Congress previously appropriated for the "steel slats."

choticastile
21 December 2018, 00:32 GMT2
000000
what's really funny is that most of the WS "experts" are not old enough to have ever seen a market really crash. welcome to the real world bumpkins..