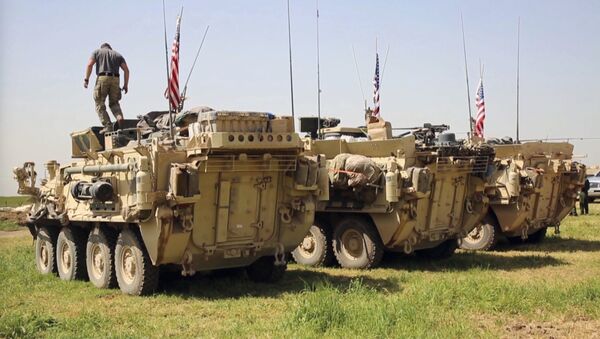 © AP Photo / APTV
Subscribe
WASHINGTON (Sputnik) - The Trump administration announced that the United States was bringing troops home from Syria to focus on the next phase of its campaign against the Daesh* terrorist group, creating uncertainty among US lawmakers while boosting spirits in Moscow over prospects for achieving a political settlement.

White House spokesperson Sarah Sanders in a statement on Wednesday said that the Trump administration was withdrawing US troops from Syria to begin its next phase in the campaign against Daesh.

A senior US administration official told reporters in a conference call that US President Donald Trump informed Turkish President Recep Tayyip Erdogan about the withdrawal of US forces from Syria but the two leaders did not discuss the decision.

The official also said despite the troop withdrawal the United States would not abandon efforts to counter Syrian President Bashar Assad and Iran.

"We will continue to robustly employ the broader tools that we have across the government to try to affect the behaviour of the Assad regime, of his Iranian enablers", the official said on 19 December.

Pentagon chief spokesperson Dana White confirmed that the pullout of US forces from Syria had begun, and stressed that the US-led coalition’s fight against Daesh is not over.

READ MORE: Neocons Enraged by Withdrawal of US Troops From Syria

Earlier on 19 December, Trump declared that the United States had defeated Daesh in Syria, adding that the terrorist group was the only reason that US troops were fighting in the Middle Eastern country during his presidency.

About 2,000 US troops are currently deployed in Syria as part of a campaign to defeat Daesh.

Russian FM: US Troops Withdrawal Enables Outlook for Syria Political Settlement
Russian Foreign Ministry spokeswoman Maria Zakharova said on Wednesday that the decision of the United States to withdraw its troops from Syria creates a real possibility for a political settlement in Syria.

However, she added that Moscow would like to understand what the United States means by the "next phase" of its Syria campaign.

Zakharova underscored that with the withdrawal of US troops, places like Al-Tanf and Rukban, which were located in the zone of deployment of the occupying troops and in the zone of support for the militants, regain hope and prospect for a peaceful settlement.

The withdrawal of US troops in Syria would also help in the creation of the Syrian Constitutional Committee, Zakharova added.

Zakharova recalled that US troops had been present in Syria illegally, without a corresponding invitation from the government of the republic and without any resolutions of the UN Security Council.

READ MORE: French Ex-Minister: US Withdrawal From Syria a 'Victory for Syrian People'

However, one Syrian lawmaker appeared sceptical about the US announcement. Syrian parliament member Ahmad Merhi told Sputnik that it is too early to tell if the United States will fully implement the decision to exit Syria.

"We have to wait to see what is the background of this decision. Maybe Trump is trying to get more money from the Gulf world so we cannot say anything about this statement now because Trump changes his mind every day," Merhi said. "It’s too early to say if Trump’s decision will actually be implemented… No one trusts Trump, he is a big liar".

A current member of the Syrian Negotiation Commission (SNC) and a member of the Political Committee of the National Coalition for Syrian Revolutionary and Opposition Forces (SOC) Hadi al-Bahra told Sputnik on 19 December that the United States made the decision to pull out its forces from Syria in full coordination with Turkey in order to avoid unintended clashes.

"After Turkey patiently waited for a long time for the United States to deliver on the agreement for Manbij, at last, it found itself due to its own national security concerns in a position that it has to act military to secure its borders, and it did inform the United States about its planned operations", Hadi al-Bahra said. "In order not to complicate the situation and risk unintended clashes, the United States has decided to pull its troops out in full coordination with Turkey".

Hadi al-Bahra added that coordinating the US troop pullout from Syria with Ankara will empower Turkey to have a stronger role within the Astana group.

He added that Turkey has no ambitions in Syria and does not aspire to remain there after a political solution leading to the implementation of UN Security Council Resolution 2254 has been reached.

US, French Military Withdraw From Manbij Area in Northern Syria - SDF Source
Russia and Turkey will have to play a stronger role in a political settlement of the Syrian conflict after US forces withdraw, Hadj al-Bahra said. Moreover, the US withdrawal will complicate the ongoing fight against Daesh and will add more pressure on Turkey and Russia to defeat the terrorist group, he said.

Israeli Prime Minister Benjamin Netanyahu said in a statement on Wednesday he would study assess the impact of the US exit from Syria on Israeli security.

"This is, of course, an American decision. We will study its timetable, how it will be implemented and – of course – its implications for us", Netanyahu said in a press release. "In any case, we will take care to maintain the security of Israel and to defend ourselves in this area".

Netanyahu said he had spoken earlier with Trump and Secretary of State Mike Pompeo, who made it clear that they had "other ways of expressing their influence in the area."

Turkey, Russia to Play Stronger Roles In Syria After US Troops Pullout - SNC
The United Kingdom Foreign Office said the international coalition made huge progress in Syria and the war against IS should continue.

A source close to the Arab-Kurdish formations of the Syrian Democratic Forces (SDF) told Sputnik on Wednesday that US and French forces began to abandon their posts near the city of Manbij in northern Syria.

Trump drew the ire triggered some hysteria from US hawkish lawmakers who were outraged with the decision. US Senator Marco Rubio said The Trump administration’s reported decision to withdraw all US troops from Syria threatens to embroil the United States and its allies in a much deadlier and potentially broader conflict in the Middle East.

"What has been decided here could very well in the short term involve America’s disengagement from yet another entanglement, but I believe in the months and years to come will lead to a potentially broader engagement, which is much deadlier, much costlier and much more dangerous", Rubio said in a live video on Facebook.

US Pulling Out its Troops From Syria is 'Stab in the Back' - Kurdish Coalition
Rubio said the US withdrawal may be seen by Israel and Sunni Muslim countries as an advantage to their biggest adversary, Iran. He added that the US withdrawal may lead to greater conflict in the region that could see US forces reengaging in the area in the future, Rubio said.

The US withdrawal could also lead to a regional arms race and the prospect that both Egypt and Saudi Arabia will seek nuclear weapons to defend themselves amid a decline in American’s influence and willingness to protect the nation’s allies, Rubio added.

Russia and China will take advantage of perceived US weakness, Rubio said.

Rubio called on Trump and his administration to reverse today’s decision.

Israel to Continue Combating Iran in Syria if US Forces Leave - Ambassador to UN
Ranking Member of the Armed Services Committee Senator Jack Reed in a statement referred to Trump’s decision to withdraw forces from Syria as a betrayal of Kurdish allies who continue to fight IS in the region.

Reed said the US withdrawal from Syria would bring security threats to Israel, Iraq, and Jordan that are crucial regional partners to the United States. In particular, Iran would likely take advantage of the withdrawal from Southeast Syria and use the land route to move weapons and personnel to attack Israel, he added.

There were some back-handed compliments regarding Trump’s decision from some Democratic lawmakers. US Senator Chris Murphy said in a statement on Wednesday that although he supports the Trump administration's decision to remove troops from Syria, the United States will need to rejoin the diplomatic process in order to ensure humanitarian relief for the Syrian people.

Murphy noted the number of US troops in Syria has always been too small to make any "decisive difference."

On Friday, Erdogan said that Ankara was ready to launch an operation in the Syrian Manbij against the Kurdish People's Protection Units (YPG) if the United States does not withdraw them from the area.

Erdogan said Monday that Trump had approved of the prospective military operation that Ankara was planning to launch in Syria against Kurdish forces on the eastern bank of the Euphrates river in Syria. However, the US State Department has disputed that claim.

Syria has been in a state of conflict since 2011, with numerous opposition groups and terrorist organizations fighting the Syrian Arab Army in an attempt to topple the government of Bashar Assad. Russia, along with Turkey and Iran, is one of the guarantor states of the Syrian ceasefire.

The US-led coalition of more than 70 countries is conducting military operations against the Daesh terrorist group in Syria and Iraq. The coalition's operations in Iraq are conducted in cooperation with the Iraqi government, but those in Syria are not authorized by the Syrian government or the UN Security Council.

000000
Popular comments
US pulling their troops out of Syria sounds good, but unfortunately it is highly likely that this only sounds good. When Trump announced to the world that he would be working with Russia in Syria to destroy ISIS and would respect the rights of the people to decide who would be the leader of Syria in so many words, questionable videos appeared and a day later, the US bombs a Syrian airbase. Next, he announces that US troops will be leaving. Then even more ridiculous videos of kids standing in line to be hosed down, many while clothing is still on or are wiped down with bare hands, followed by more bombs. What will follow this time? If they actually leave this time, it probably just means they have bigger tricks up their sleeve this time. Perhaps Turkey pressured them to leave, but I would have to see positive and lasting change happen before I will believe this isn’t some kind of trick with a new round of trouble to follow.
Darrell R
20 December 2018, 11:09 GMT2
000000
Don't worry behappy, spot on i also think its the main reason the special senate committee directed that for a number of illegalities Trump must back out of Yemen I imagine Syria was also included behind closed doors with no media attention. On the basis of protecting the US troops.