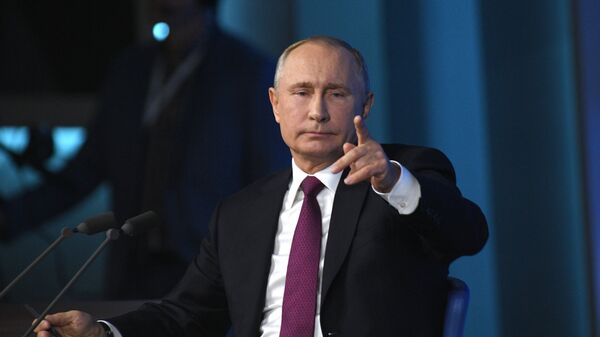 © Sputnik / Evgeny Biyatov
/
Go to the photo bank
Subscribe
Russian President Vladimir Putin held his 14th annual end-of-the-year press conference on 20 December, having touched upon a wide array of issues, including relations with the US and Ukraine, anti-Russia sanctions, and arms control.

During the press conference that lasted almost four hours, President Vladimir Putin answered 66 questions, including on arms control.
The president pointed to the fact that the arms control regime was falling apart across the world.

Putin Holds Large Annual News Conference in Moscow (VIDEO)
The repercussions of the US decision to withdraw from the Intermediate-Range Nuclear Forces (INF) Treaty were unpredictable and could lead to a global catastrophe, the president stressed.

Putin has elaborated that today there’s a trend of lowering the threshold for the use of nuclear weapons, but Russia knows how to ensure its own security.

In early December, US Secretary of State Mike Pompeo announced that Washington would suspend its obligations under the 1987 INF Treaty within 60 days if Russia didn’t return to full compliance. Moscow, in turn, has repeatedly stated that the accusations of violations of the accord on its part were baseless.

US Withdrawal From Syria

Dwelling on President Donald Trump’s earlier announcement that all 2,000 US troops would leave Syria following their victory over Daesh*, Putin said that he was not sure of the terms of the withdrawal, because the US has maintained its presence in Afghanistan for over 17 years, and has consistently said that it was pulling the military out of the country. But they are still present there.

“We don’t see any indication of the US withdrawing troops as of yet but I accept that it may be happening”.

Although their second full-fledged meeting that was expected to be held on the sidelines of the G20 summit in Argentina was called off by Trump, Putin said that he was ready for another rendezvous – if the other side wished to have one.

At #Putin's annual press conference, he is asked about whether his get-together with Trump will happen. He responds: "I don't know… We're ready… Joint work of experts on #Syria is ongoing." #Russia #PutinPresser2018 pic.twitter.com/FjjTdoMcKU

According to President Putin the main goal behind the West’s relentless sanctions is to undermine Russia as a competitor and to stop it from developing.

READ MORE: Putin Says US Has No Reason to Keep Russian National Butina in Custody

The head of state stressed that there was no logic in imposing sanctions on Russia over the so-called Skripal case, while doing nothing in relation to the killing of Jamal Khashoggi, a Washington Post journalist:

"[Jamal] Khashoggi was obviously killed – everyone agrees with that – and [Sergei] Skripal is alive, thank God. Nevertheless, sanctions have been piled on Russia, while nothing was done in the former case, total silence. It is a politically-motivated Russophobe approach. It [Skripal case] was only a pretext for another attack on Russia… The goal is to contain Russia as a potential competitor", he said.

At the same time, the president stated that Russia’s economy had already adapted to these restrictions.

On 4 March, Sergei Skripal and his daughter Yulia were found unconscious near a shopping centre in Salisbury, UK. The British government said they had been subject to poisoning with a military-grade nerve agent, with London accusing Moscow of attempted murder and later claiming that the perpetrators worked for Russia's intelligence agency GRU. Although Russia strongly denied its involvement, while the UK provided no proof, its Western allies stood in solidarity, having ordered a coordinated expulsion of over 150 Russian diplomats. 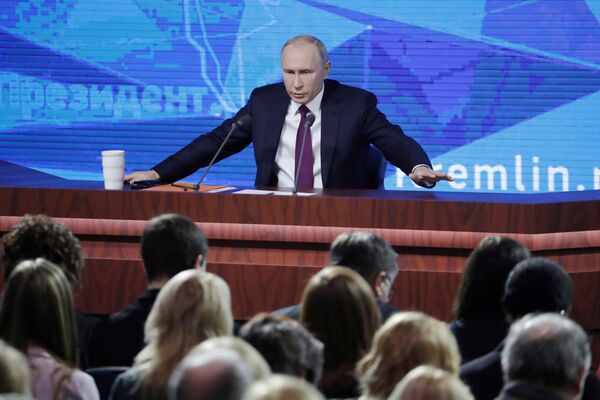 Reflecting on the question about the naval incident in the Kerch Strait when three Ukrainian warships illegally crossed Russia’s maritime border, President Putin dismissed it as a provocation aimed at aggravating the situation.

Putin: Kiev's Provocation in Kerch Strait Likely Helped Poroshenko Rise in Polls
He stated that the provocation ahead of the election in Ukraine had been somewhat successful because Ukrainian President Petro Poroshenko’s ratings seemingly increased.

The Russian president suggested that the Ukrainian government had sent those sailors to the area hoping that they would die.

On 25 November, two gunboats and a tugboat violated the Russian maritime border, sailing toward the Kerch Strait, the entrance to the Sea of Azov, ignoring the legal demands to stop and leave the area. Russia seized the Ukrainian vessels and detained 24 crew members; the investigation into the case is underway.