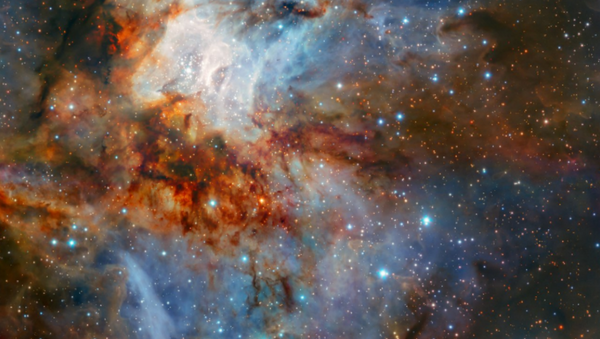 © Courtesy of European Southern Observatory
Subscribe
Researchers have found something that might shed some light on what our universe was like almost immediately after the Big Bang – the moment when everything that exists originated.

A group of astronomers of the Swinburne University of Technology in Australia have discovered a huge "fossil cloud" of pure material in the far corner of the universe, utilizing some of the most powerful telescopes on Earth, Astronomy.com reports. According to the scientists, the cloud has barely changed since the dawn of existence.

"Everywhere we look, the gas in the universe is polluted by waste heavy elements from exploding stars. But this particular cloud seems pristine, unpolluted by stars even 1.5 billion years after the Big Bang," said Fred Robert, one of the lead researchers.

"If it has any heavy elements at all, it must be less than 1/10,000th of the proportion we see in our Sun. This is extremely low; the most compelling explanation is that it's a true relic of the Big Bang," he added.

To make this discovery possible, the team used the W. M. Keck Observatory in Hawaii, which sports the world's largest optical and infrared telescopes.

Astronomers discover a "fossil cloud" of pristine gas leftover from the Big Bang. Since the ancient relic has not been polluted by heavy metals, it could help explain how the earliest stars and galaxies formed in the infant universe → https://t.co/M45KXbaiC3 pic.twitter.com/fsNrrDuzz4

Astronomers Detect Another Possible 'Alien Megastructure' Star
​During their research, the team also found a quasar, an ultra-bright, active galactic nucleus emitting lots of energy, covered by the cloud. The quasar serves as a natural light source, illuminating the gas in the cloud and allowing the researchers to see the spectral shadows of hydrogen within, Astronomy.com reports. And because it hasn't been contaminated, it offers look at what the cloud was like billions of years ago.

While this cloud is not the first remnant of the Big Bang ever discovered — two similar clouds were discovered in 2011 — this latest find marks the development of a method for astronomers to successfully search for more.

"The first two were serendipitous discoveries, and we thought they were the tip of the iceberg. But no one has discovered anything similar — they are clearly very rare and difficult to see," says astronomer John O'Meara, a member of the team that discovered the first two fossil clouds. "It's fantastic to finally discover one systematically."

"It's now possible to survey for these fossil relics of the Big Bang," Michael Murphy, another lead researcher on the team that found the latest cloud, said in the statement.

According to the astronomers, studying these ancient clouds will provide us with a better idea of what the universe was like at the time of the Big Bang, and probably explain how and why some gases in the early universe coalesced into certain stars and galaxies, and others didn't.

The team's research is set to be published in the journal Monthly Notices of the Royal Astronomical Society. An electronic preprint of the work is available on the preprint server arXiv, according to Astronomy.com.