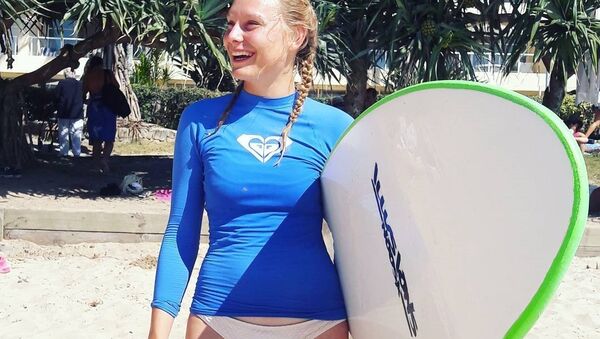 © Photo : Instagram/louisavesterager
Subscribe
The women, from Denmark and Norway respectively, made their way from the Moroccan capital to a plateau up in the mountains and set up a tent there, which suspected criminals reportedly kept on the hook for quite a while.

The two women, who were training to be tourist guides, 24-year-old Louisa Vesterager from Denmark and Maren Ueland, a 28-year-old Norwegian, were knifed and decapitated while on a hiking tour in the Atlas Mountains of Morocco.

Danish intelligence services have authenticated a highly graphic clip now circulating online showing one of the women being murdered, after the suspected criminals were reportedly seen lying in wait in the vicinity. Meanwhile, Reuters quoted a police source as saying that the video appeared to have been filmed in a different location from where the bodies were found.

After arresting the first suspect on Tuesday, police arrested another three on Thursday, with the Rabat public prosecutor’s office confirming that at least one of the group is linked to terrorists. In the meantime, Norwegian newspaper Vg.no quoted a source saying that all four, who are between the ages of 25 and 33, had sworn allegiance to a Daesh* terrorist cell.

Around one week ago i was drinking cold beers and having a nice summertime next to the Julian Alps.. Well that summertime changed quickly to hot chocolate and a winterparadise. But i love it, and then with so many beautiful people like this lady for ex. ☝️👐 @vildetveitoo…. #nofilter #blue #ice #naturephotography #nature #naturalisa #glacier #mountain #outside #outdoorlife #outdoors #outdoor #outdoorliving #mitno #utno #jotunheimen #dnt #norge #norway #mountaineering #climbing #climb #mountains #love #beautiful #winter #landscape #instagood #instadaily #turjenter

"The times when the motivation is lowest, the victories feels the biggest" Loui It is not often my motivation is low when going into the mountains, but today we had one of those days. Good we had each other and made it to another top 😋…. #naturephotography #nature #mittnorge #mountains #outside #outdoorlife #outdoors #outdoor #outdoorliving #mountain #mitno #utno #turjenter #dnt #norge #norway #love #beautiful #happiness #landscape #instagood #instadaily #inspire #travel #explore #beautiful #breathtaking #girl #motivation #quotes

Both Moroccan and Danish authorities stressed that the crimes are politically motivated and should be investigated as acts of terror, in which one backpacker was beheaded and the other one sustained serious neck wounds.

The video features a woman screaming while a man carries out an atrocity with a kitchen knife, with the perpetrators heard linking the crime to the West conducting airstrikes in Syria:

"This is for Syria, here are the enemy heads of your Gods", was heard on the clip.

The women reportedly first stayed in a cheap hotel in the Moroccan city of Marrakesh, before setting off on their mountain trek, where they could have been followed by three local men they had communicated with while in Marrakesh. The bodies were found on Monday morning by French tourists hiking nearby.

000000
Popular comments
Which countries are responsible for the establishment of Daesh, which countries did sponsor them with money, weapons, pussies and training. Follow the money and let them pay!