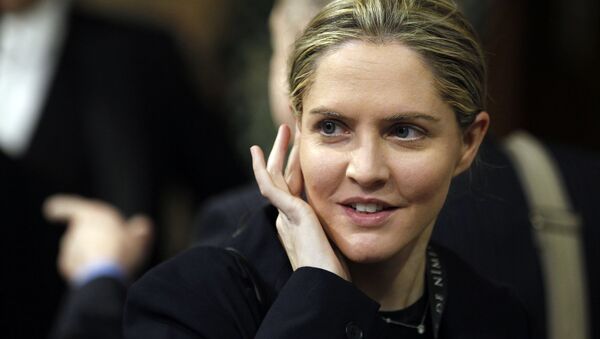 On December 15, the American Civil Liberties Union published an article on Blockchain, with input from famed NSA-leaker Edward Snowden. Mensch responded to the piece on Twitter, suggesting the Snowden's exposures were committed on behalf of Russian President Vladimir Putin.

Mensch continued with these baseless smears, causing WikiLeaks to enter the fray — the organization's official account asked Snowden whether he'd like them to launch legal action on his behalf. Unbowed, Mensch proceeded continued with her slanderous postings.

What the hell is espionage against the United States committed on behalf of a homophobic fascist who kills journalists on his birthday? We asked @Snowden and his enabler @ACLU

@snowden do you want us to sue this serial fabricator?

In the past, Mensch has made a number of sensational — and utterly ludicrous — claims about Russian interference in Western politics, for instance in April suggesting the Kremlin, which began the day after a black man, Michael Brown, was gunned down by white police officer Darren Wilson in Ferguson, Missouri.

Likewise, she has accused a vast number of people of being tools of the Russian state, including Israeli Prime Minister Benjamin Netanyahu, PayPal cofounder Peter Thiel, Facebook chief Mark Zuckerberg, among others.

In August 2017, she went so far as to suggest President Donald Trump's former modelling agency was under investigation for sex trafficking.

To date, Mensch hasn't faced censure for her libelous psychobabble — but that may change in the very near future.

In July 2012, while a Conservative MP, Mensch admitted on an edition of BBC Question Time taking Class A drugs in her youth left her with "long-term mental health" problems, including suffering protracted bouts of anxiety.

"The plain fact of the matter is drugs are incredibly addictive and destroy lives. I am somebody who has used drugs in the past, Class A drugs. It messed with my head, and it's a terrible thing and I do not want to see other young people exposed to that by legalisation. It's something I regret incredibly, we all do stupid things when we are young. It's had long-term mental health effects on me. It's nothing that anybody needs to glorify," she lamented.

It's unknown whether Mensch's debilitating use of illicit substances has contributed to her paranoid mindstate when tweeting about Russia. It is however thought her experimentation coincided with her employment at the now-defunct British record label EMI in the 1990s — during that period she wrote a numbers of poems, published by satirical magazine Private Eye not longer after her drug disclosures.

I am winged, for I am a wild angel

My blood rushes black as the high winds

My hair is a banner on wide plains

And I am Louise of the City of Glass,

Louise the dreamer, the shaper of worlds

There is a grey lordling rules the earth

A little angel, less than an angel

Presiding over the rising cities

And all the slow webs of glinting cars

Which lace the far air

And men who scurry here and there

Under it all we people racing

To make the last train

The new moment off

Afraid if we stop

We hear the bright light, the blind light

Ahead, falling over the edge

Our white desire; we may not stop to seek

But scurry, or tied, creep and keep

The rule of the lord, the corners of the street

But though we have no time to pause

Trembling under his whip we roll

Towards his last border

Since we have music, sir, I go

Dance with the drums, recking (sic) ye not

000000
Popular comments
So, she is Theresa Mays mentor then?