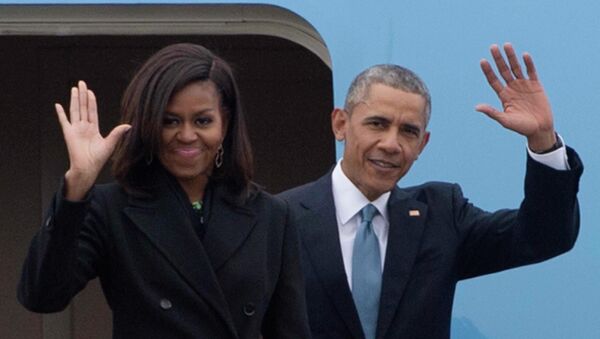 © AFP 2021 / JIM WATSON
Subscribe
Speaking with nighttime television host Jimmy Fallon about how she felt during US President Donald Trump’s inauguration, former First Lady Michelle Obama made a remark that some viewed as a slight at her successor.

Michelle Obama appeared Tuesday on NBC's "The Tonight Show Starring Jimmy Fallon" and spoke about her time as first lady, her final days in the role in particular.

During the show, Fallon showed Obama a photo of her and her husband, former President Barack Obama, waving as they departed from White House aboard Air Force One following Trump's inauguration.

"Can you just walk me through — " Fallon started to ask, pointing at the photo, when the former first lady interrupted him with a quip: "It was, like, ‘Bye, Felicia.'"

Both the host and the audience then burst into laughter.

The phrase "Bye, Felicia" is used specifically when one intends to show a total lack of interest in another person, in a humiliating way. It was coined by rapper Ice Cube's character Craig in the 1995 cult stoner comedy movie "Friday."

While it is unclear to what or whom exactly Obama was referring, some — such as Daily Mail pundit Piers Morgan — perceived the remark as being addressed to current First Lady Melania Trump.

"It's specifically designed to cause hurt to the recipient," Morgan wrote Wednesday in an opinion piece in the Daily Mail.

Obama Dismisses Texas Judge Ruling on Obamacare: It ‘Changes Nothing’
It is no secret that the former first lady has a low opinion of Donald Trump.

"I will always wonder about what led so many, women in particular, to reject an exceptionally qualified female candidate and instead choose a misogynist as their president," Obama wrote in her book, "Becoming."

In the same book, she described her feelings during the inauguration day: "Someone from Barack's administration might have said that the optics there were bad, that what the public saw didn't reflect the President's reality or ideals, but in this case, maybe it did. Realizing it, I made my own optic adjustment. I stopped even trying to smile."

It's not a stretch, then, to presume that Michelle's quip was actually addressed to Melania Trump. The fact that names "Felicia" and "Melania" sound similar, could also bolster the case, Morgan argues.

"Oh Michelle. Not you, too?" Morgan writes. "Just when I thought there was one person in public life that soared effortlessly and admirably above the incessantly ugly partisan trash-talk that pervades every second of American airspace these days, Mrs. Obama has let me down."

George Bush Sneaks Michelle Obama Candy at Father's Funeral (VIDEO)
According to Morgan, the former first lady also let herself down, too, by opting to quip at the current first lady like this.

"[Y]ou can hate Donald Trump and still admire his wife Melania for the way she is conducting herself, perhaps even more so given she has had to endure massively more scorn, ridicule and shame over all her husband's scandals," he writes.

"What I find far harder to admire is Michelle Obama's decision to now publicly mock, denigrate and ridicule her successor."

There is one factor Morgan is likely missing. The phrase "Bye, Felicia" is usually said to the person leaving. Who knows? Maybe Obama was talking about herself, after all?

000000
Popular comments
It's funny, you listen to some Americans and you think 'ha, so they have mastered some basic social skills', but then *zip* bombs away.