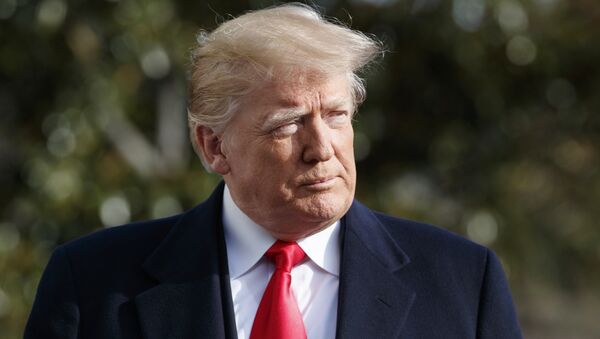 US President Donald Trump has dubbed in a Twitter post alleged Russia's meddling 'a hoax' that ruined reputations of many people, adding the entire 'Russian Witch Hunt' had to be stopped immediately.

Trump's statement comes amid Special Counsel Robert Mueller's investigation into alleged Russian interference in the US presidential campaign along with another probe carried out by the US Congress.

Michael Isikoff was the first to report Dossier allegations and now seriously doubts the Dossier claims. The whole Russian Collusion thing was a HOAX, but who is going to restore the good name of so many people whose reputations have been destroyed?

The US president also stated that the allegations "will never be proven and are likely false."

….WILL NEVER BE PROVEN AND ARE LIKELY FALSE.” Thank you to Michael Isikoff, Yahoo, for honesty. What this means is that the FISA WARRANTS and the whole Russian Witch Hunt is a Fraud and a Hoax which should be ended immediately. Also, it was paid for by Crooked Hillary & DNC!

The statement comes shortly after Trump condemned Facebook, Twitter for allegedly removing names in posts stressing that the online platforms were biased and favoured the Democrats, which he said was 'ridiculous'.

In his recent Twitter post, Donald Trump also has wished good luck to his former national security adviser Michael Flynn, who will appear in federal court on Tuesday to receive his sentence in a probe into alleged collusion with Russia.

Good luck today in court to General Michael Flynn. Will be interesting to see what he has to say, despite tremendous pressure being put on him, about Russian Collusion in our great and, obviously, highly successful political campaign. There was no Collusion!

​The general, one of the most high-profile suspects in the investigation led by Special Counsel Robert Mueller, stands accused of allegedly lying to the FBI about his contacts with the Russian ambassador during the 2016 US presidential campaign.