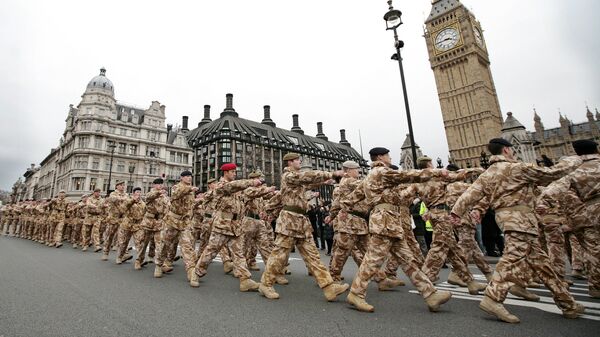 The defence secretary also revealed his ministry had not yet received any formal requests from other government departments about using armed forced in the event of a no-deal Brexit.

UK Defence Secretary Gavin Williamson has announced 3,500 service personnel will be on standby "for any no-deal Brexit disruption."

As Williamson explained during an exchange with Tory MP Will Quince in the House of Commons, the Ministry of Defence had not received "any formal requests from any government departments" about using military personnel in the event of a no-deal Brexit.

"But what we are doing is putting contingency plans in place, and what we will do is have 3,500 service personnel held at readiness, including regulars and reserves, in order to support any government department on any contingencies they may need", he said, as quoted by The Guardian.

Hard Brexit: UK Prepares to Deploy Troops on Streets Amid 'No-Deal' Chaos Fears
On Tuesday the UK Cabinet agreed to intensify efforts to get ready for a Brexit no-deal scenario, with Brexit Secretary Steve Barclay stating while "the government's priority remains to secure a deal", a responsible government should also be preparing for the worst.