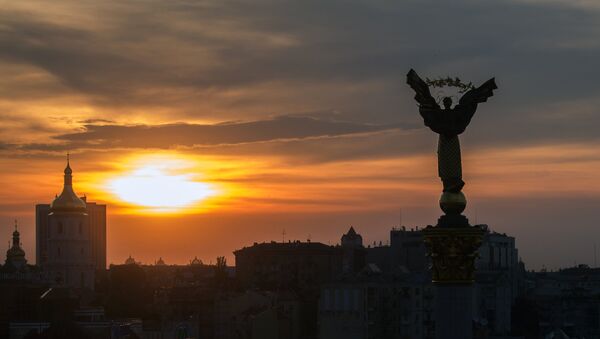 Kit Klarenberg
All materials
Among the bombshell leaked documents exposing the internal workings and activities of the shadowy Institute for Statecraft - the front 'charity' behind Integrity Initiative - is a file dating to July 2016, detailing how the organization facilitated a visit of Ukrainian Reserve Officers to the UK, an effort bankrolled by the Ministry of Defence.

The five-strong group flew into Gatwick airport on the morning of July 6 — upon arrival they travelled straight to the Institute's grand headquarters at Two Temple Place, London, for an introductory meeting and buffet lunch.

The itinerary provides brief biographies of the reservists, outlining the extensive experience of each officer in the Eastern Ukraine conflict. One — Roman Myhailyk — is said to have been in active service since the beginning of conflict in June 2014 when, acting with cooperation with the Ukrainian Security Service, "he carried out deep reconnaissance operations to gather vital intelligence information for the Ukrainian Army" — "during 56 such operations behind enemy lines he has taken 37 Russian Federation army officers as prisoners and handed them over to Ukrainian military force."

The purposes of their trip were manifold, including "[reinforcing] the lessons of the conflict outlined in the March 2016 Army study (Insights into Training Smarter against a Hybrid Adversary), "making the issue [of hybrid warfare] available to academics and journalists" and "[engaging] them in developing awareness and understanding of the issue in Whitehall and beyond."

Over the course of the next seven days, the quintet would conduct a whirlwind country-wide tour, spending days and nights at several major military installations, offering extensive briefings to key British and NATO military intelligence and planning units, including the 3rd Military Intelligence Battalion and 77th Brigade — the information warfare outfit created by Whitehall in 2014.

They also met with the House of Commons Defence Committee — and Deborah Haynes, The Times' Defence Correspondent.

It would be several weeks before Haynes wrote an article on the visit, with support from Moscow-based journalist Marc Bennetts, under the headline 'Ukraine spills secrets of Putin's military machine to British Army'.

Haynes explains a 'defence source' told her Ukrainians have been experiencing "the Third World War on a tiny scale" and the UK could "learn from them in terms of modern high-end warfare and hybrid operations", so the reservists were "hosted as part of a think tank-sponsored visit".

While Haynes at no point directly acknowledges she met with the group in person, she quotes reservist Rafael Liukmanov as saying it was vital for Britain and NATO to understand "Russia's use of information warfare", as the West is "not ready" to cope with the hazard yet.

Haynes is the only journalist listed in the document as having met with the reservists, so it's somewhat puzzling she didn't publicize the privileged and significant 'scoop' for so long, and avoids directly informing readers of their face-to-face summit. It's also unclear how a meeting of such significance scheduled to run for two-hours yielded but a 500-word piece in the paper.

Haynes was evasive when I contacted her about the meeting on Twitter, claiming to have "not seen" Integrity Initiative documents, failing to definitively confirm or deny having a relationship of any kind with the Institute or Initiative, and making thinly-veiled threats of legal action for "publishing false accusations". She hasn't responded to any subsequent requests for clarity from myself or other curious users since.

There may be a perfectly innocent explanation for this informational deficit. It may also be mere serendipity the article was published the day after Haynes wrote an 'exclusive' analyzing ‘Insights into Training Smarter against a Hybrid Adversary' — the very British army study the Institute for Statecraft referenced in the reservists' tour itinerary, citing "[reinforcing] the lessons of the conflict" as a key aim of the trip.

The document — 'leaked' to The Times — makes a number of sensational claims about Russian military tactics and capabilities. Federation forces are said to "integrate high-end conventional weapons, electronic jamming devices, covert sabotage missions and the exploitation of social media", and weaponize information "using websites, radio stations and mass text messaging to influence opinion, spread fear and cause confusion as part of a new kind of fighting in which anything is a weapon."

The report's blunt message is clearly reflected in the article's headline — ‘Russia has edge over us in battle, army admits' — and is a clear advocation of greatly inflated defence spending to counter the apparent threat posed by Moscow. This message also reverberates throughout Haynes' piece on the Ukrainians' visit to London, with Defence Select Committee chair Julian Lewis — also named in Institute documents — quoted as calling for the government to increase the UK's defence budget to three percent of GDP.

"It's absurd in the security situation we should be content with achieving the bare [NATO] minimum of two percent when as recently as the 1980s we were regularly hitting between 4.5 percent and 5.1 percent," he explains.

Other leaked Institute for Statecraft documents suggest boosting Britain's military spending is a key objective for the organization — and achieving a "tougher stance in government policy towards Russia" is a stated Integrity Initiative 'performance indicator' in bids for government funding the opaque subsidiary submitted to the Ministry of Defence.

The organizations also count several military intelligence veterans among their senior staff. For instance, Chris Donnelly — Institute Director and Initiative Senior Manager — is a reserve officer in the Army Intelligence Corps who once led the military's Soviet Studies Research Center at Sandhurst, and was appointed an "Honorary Colonel in Military Intelligence" in 2015, the same year the Integrity Initiative was launched. Between 1989 — 2003, he was also the NATO Secretary General's Special Adviser for Central and Eastern Europe.

In March 2014, Donnelly authored a document on the Ukraine crisis, outlining a number of "measures" he'd employ against the Russian Federation if he "were in charge" — all proposals being incendiary and illegal military provocations of the most extreme kind. Quite whose eyes the document was intended for, and what impact it had and where, is unclear — but had any of the suggestions come to pass, the result would've surely been far in excess of "the Third World War on a tiny scale" claimed by Haynes' Ministry of Defence source. 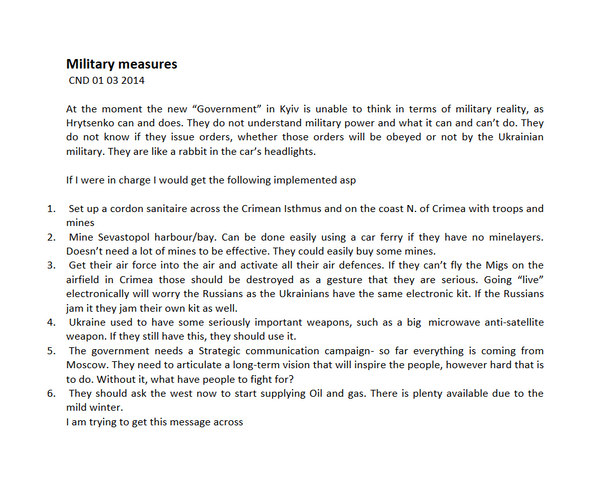 Why Haynes alone was chosen to interview the Ukrainians is unclear, although she's listed in internal files as being part of the Initiative's UK ‘cluster'. These are secret networks of politicians, businesspeople, military officials, academics and journalists the organization has cultivated the world over who "understand the threat posed to Western nations" by Russian "disinformation" and can be mobilized to influence domestic politics in their home country.

The files offer a case-study of how the Initiative's Spanish cluster colluded to prevent the appointment of Pedro Banos, an army reservist and author the Spanish Socialist party wanted to make the country's Director of National Security. When his candidacy was announced, cluster members colluded via WhatsApp to flood social networks with anti-Banos messages, and provide the Spanish media with a 'dossier' of negative material on the former head of counterintelligence and security for the European army. Within 24 hours, the appointment was blocked.

The nature of Haynes' relationship — or lack thereof — with the Initiative is unknown. It may well be she was merely an "expert in [the] field who'd been considered a potential invitee to future cooperation", and had "nothing to do with the program", which the Initiative claimed was case for many individuals named in their hacked files.

Still, whether knowingly or unknowingly, Haynes and her employer very effectively supported the Institute and its Initiative subsidiary in their intertwined primary objectives of hyping the Russian 'threat', degrading relations between London and Moscow, and rallying public support behind a sizeable increase in defence spending.

The views and opinions expressed in this article are solely those of contributor and do not necessarily reflect those of Sputnik.